There are many ways of discriminating women

Disadvantages in terms of income, poor career prospects, sexual harassment: women are exposed to many kinds of discrimination at work. But they know who helps them: the Chamber of Labour.

All in all, the situation of women at work has hardly improved over the past few years. In most cases, discrimination is experienced in the form of unequal pay and a lack of promotion prospects. 42 percent of the women say that they are worse off in terms of wage or salary than their male colleagues. This is the same percentage as four years ago.

One quarter of the women, each, regard themselves discriminated when it comes to promotions and jumps in the career, when responsible tasks are to be undertaken, applications are to be accepted and positions are to be allocated. Every fifth woman feels that her work is less valued than the work performed by the men in the company.

Exactly half of the women have a female superior, compared to only 47 percent in 2014. The situation of men is different: only nine percent of them have a female boss - with a slightly downward trend.

(Sexual) harassment continues to be a daily topic. Almost one third of the women have already been faced with snide remarks from colleagues, almost every tenth has even suffered physical assault.

The Chamber of Labour helps women

More than half of the employed women (57 percent) believe that the Chamber of Labour speaks up for equality at work. Compared to 2012, this is a rise of 23 percentage points. Far behind on places two and three there are the Ministry of Women’s Affairs and the trade unions with 44 and 34 percent, respectively. It is gratifying that the share of women thinking that nobody supports the cause of equality has declined by 24 percentage points within a period of four years.

Disquietingly, however, almost 30 percent of the women don’t know who they can turn to in their companies if they are discriminated. Outside the companies, the first contact for more than one third is the Chamber of Labour, followed by the trade union (twelve percent), the Ombud for Equal Treatment (seven percent), and lawyers (seven percent). 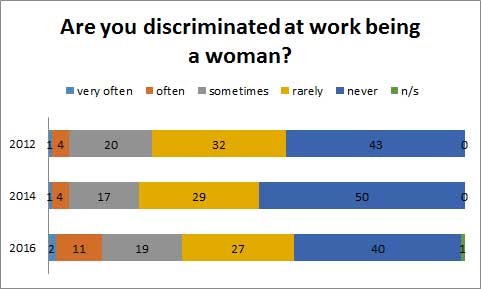 The Chamber of Labour’s efforts for better childcare provision has paid off: two thirds of the employees are satisfied with what is available.

One quarter of the employees having children are very satisfied with childcare provision, another 41 percent are satisfied. Both values have increased by seven percentage points since 2014. Among the mothers, the share of those who are very satisfied has grown from 18 to 30 percent.

These figures, however, are no contradiction to the Chamber of Labour’s political demand for a further extension of childcare facilities. More than half of the respondents use crèches, day-care facilities, etc., only rarely or never, mainly because there are too few places available.

One quarter of the companies offer family-friendly regulations, considering, for example, the needs of parents with small children when it comes to holiday planning. In some companies there are special work time and flexitime models, or colleagues help by substituting each other in times of absence. Only a small portion of the employees are fortunate enough to have access to childcare in the company.

On an average weekday, women spend 3.2 hours with children and housework, men, however, only 1.3 hours. This is one of the reasons why women work shorter hours (7.6 hours) than men (9.1 hours) and their daily leisure time is approximately half an hour shorter. While more than two thirds of the women say that they do most of the housework themselves, this applies to only five percent of the men, with the majority of the housework being done by their partner in 60 percent of the cases. In less than one quarter of the joint households the work to be done is shared fifty-fifty.

Elfriede Schober, Vice-President of the Upper Austrian Chamber of Labour 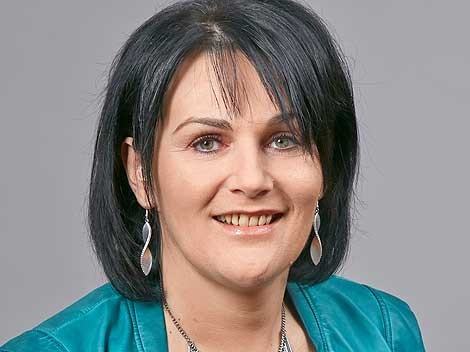 Even in the 21st century, children and housework are still women’s issues. More than one quarter of the employees having children feel heavily burdened by childcare costs. Additionally, childcare provisions are often insufficient to be able to work full-time. This has already been demonstrated by the Chamber of Labour’s Women Monitor Report and the Childcare Study: too few care places for children under the age of three, too short opening hours, too long closing times during the summer holidays - these are the major problems around childcare. The fact that many men don’t help with household chores makes things even more difficult for women.

For many years, the Chamber of Labour has supported the cause of more and better childcare facilities. A lot has been achieved, but many problems are still unsolved. We will keep at it and keep campaigning for a better reconciliation of work, family and private life. 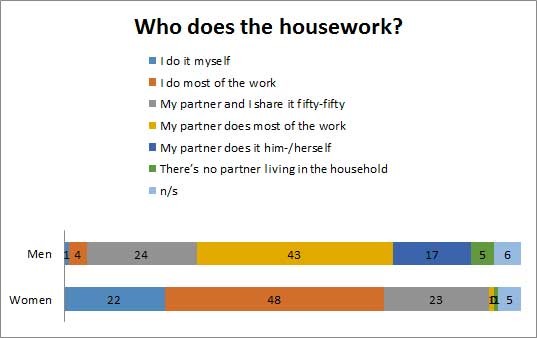 People without jobs always have a harder time

Even if many people think that it always affects someone else: unemployment is no longer a marginal phenomenon. Four out of ten employees have already become unemployed at some point in their lives.

The road back from unemployment to working life is often a bumpy one.

Among the unemployed, satisfaction with life is dramatically lower than that of employed people. Only 39 percent of the former say that they are satisfied with their lives. This is mostly due to the financial situation. 50 percent of the unemployed can’t make ends meet, almost the same percentage only just get by. Just six percent say that the money is enough.

40 percent have already been unemployed

Many people in Austria still think that unemployment is a marginal phenomenon that doesn’t concern them. Around the turn of the millennium, approx. 20 percent of the employees had known unemployment at one point in their lives, compared to 40 percent at present. Those most concerned by this are people with only minimum compulsory schooling - more than 60 percent of them have already been out of work.

Re-entering the labour market is often only possible via atypical or precarious jobs. In the past five years, 37 percent of those employees who were out of work in the previous twelve months, subsequently found themselves in atypical jobs, i.e. they worked either in temporary employments, marginal employments, through freelance service contracts or as temporary workers.

Accordingly, previously unemployed people regard their new job situations as rather negative: for 76 percent the new income is insufficient or barely sufficient to cover the cost of living; 38 percent think that the new job, too, is insecure. All in all, the Work Climate Index of people previously out of work is at 95 percent - 11 points below the average of all employees.

Every fifth employee works shifts, on a rota basis or changing working hours - with an upward trend. At the same time, the satisfaction of those concerned is declining.

Almost 700,000 wage earners in Austria work shifts, on a rota basis or changing working hours. In the past ten years, their share has grown from 16 to 18 percent. In trade, this percentage has more than doubled in the same time period.

The increase was more pronounced among women, but there are still more men than women working shifts, on a rota basis or changing working hours. This is mainly due to the fact that shift work plays an important role in the industry.

Shift work is becoming more and more unpopular: among the wage earners working shifts or on a rota basis, satisfaction with working hour schemes has declined from 72 to 59 percent within the past ten years.

Employees working shifts, on a rota basis or changing working hours work approx. two hours longer each week than what is contractually agreed. They feel more often stressed by pressure of time and workload. However, working shifts is also physically demanding, for example in production or in the field of nursing care. This may entail physical discomfort: muscle tenseness, low-back pain and headache as well as sleep problems occur more frequently than with people working regular hours. Shift workers also attribute their afflictions more often to work than other employees. Three quarters think that their tensions are caused by work.

Therefore, people working shifts believe less frequently that they will be able to work till retirement. Among all employees, 55 percent consider it probable that they will hang on, compared to only 38 percent of the shift workers, who ascribe this to the physical and mental stress as well as strenuous physical work. More than two thirds regard shift work as being too exhausting. 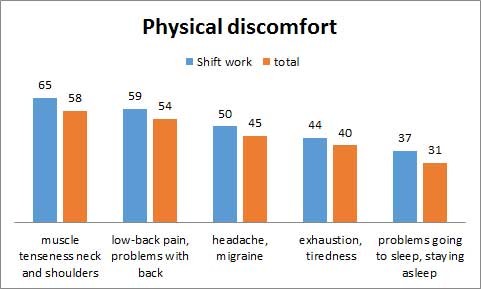 The views of employees and workers are not given sufficient consideration in economic and socio-political discussion. One reason is that there is supposedly not enough substantiated data. The Austrian Work Climate Index has been providing this data for 18 years now and is a measure and yardstick for economic and social change from the point of view of the workforce. It explores their assessment of society, their workplace, work and their expectations. The Work Climate Index records the subjective dimension and thus contributes to the knowledge of economic developments and their consequences for society.

The Work Climate Index is calculated on the  basis of quarterly surveys conducted among gainfully employed people of Austria. The random sample of some 4,000 interviewees per year is representative so that relevant conclusions can be drawn for the state of all employees and workers. The Work Climate Index is established twice a year ever since spring 1997, and in addition special evaluations are also made.

For current results and background information please refer to ooe.arbeiterkammer.at/work_climate_index, where you will not only find the substantial work climate database that can be used for analysis purposes, but you can also check on your very personal satisfaction index within minutes. The Executives Monitor is also available online and answers the question of the satisfaction rate among Austrian management personnel.