Better off with a works council

Even though the Work Climate Index indicates that employee representatives often help raise the level of satisfaction of employees with their work, such representatives are becoming increasingly rare, especially in smaller enterprises.

In the Work Climate Index 2013 survey, only 48% of employees responded that there exists a works council or staff committee in their company. Consequently, this proportion has decreased by 15% over the last decade.

Since 2003, the proportion of employees represented by a works council has decreased the most in Lower Austria (minus 35%), followed by Vorarlberg (minus 30%), Salzburg (minus 22%), and Vienna (minus 20%). In Carinthia and Upper Austria, the decline has only been minimal (minus 2% in each case). Tyrol, however, has even experienced a slight increase (plus 2%).

Over the last decade, the percentage of employees represented by a works council or staff committee has experienced the sharpest drop in small and medium-sized enterprises: in companies having five to 19 employees by half (from 14 to 7%), and in companies having 20 to 99 employees by 12% to currently 40%. While in the public sector the number of employees who have their interests represented by a works council is even rising, it has declined continuously in private enterprises from 47% to 39% throughout the last five years.

Only 8% of waiters/waitresses and other employees in the catering business as well as of hairdressers and beauticians stated that they are able to turn to an employee representative. People employed in tourism, in agriculture and forestry, in retail trade, and in business services are the least likely to have their interests looked after by a works council. By contrast, 91% of police officers and public security employees state that they have an employee representative as a person to turn to. In the case of teachers and nursing staff, this proportion is 84% in each case, while for bank employees it is 81%. 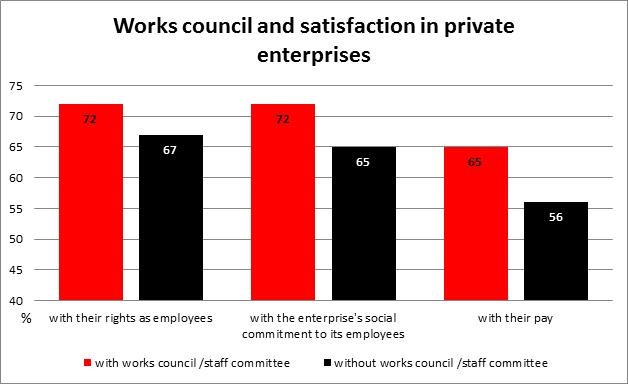 Benefits of an works council

The growing number of employees without works council coverage, especially in small and medium-sized companies, is quite alarming. Apparently, many entrepreneurs consider in-house representation of, and participation by their employees as superfluous. And yet, the figures compiled for the Austrian Work Climate Index clearly reflect that works councils bring about numerous positive aspects: employees who can turn to a works council at their place of employment are more satisfied with their rights as employees. In private enterprises having a works council, the satisfaction of employees with their pay is significantly higher than in those without such works council. The same holds true for the satisfaction with a company's social commitment to its staff. More satisfied staff members are more motivated, which in turn benefits their employer. Furthermore, entrepreneurs never tire of talking about how they promote employee health at the workplace. The Work Climate Index, however, reveals a completely different picture: in reality, it is to a large extent the employee representatives who serve as the driving force for the promotion of employee health.

Nursing professionals satisfied with their jobs

Despite all the stress involved, which is mainly of a psychological and emotional nature, the work climate index for men and women employed in nursing professions is at 115 points.

This puts nursing professionals and medical-technical assistants six points above the work climate index average of 109 points, despite the associated high share of part-timers and the often difficult work conditions.

The sub-dimensions reflect the specific aspects that nursing professionals and medical-technical assistants are more satisfied with:

Satisfied with their pay

Furthermore, the pay satisfaction of people employed in nursing is significantly greater: 79% are very or quite satisfied, versus only 56% in the rest of the labour force. Only 6% stated that they cannot make ends meet with their income - surprisingly few when considering the high percentage of part-timers. Part-timing nursing professionals earn a median of 975 euros net per month, whereas other part-timers make a monthly median of 825 euros. Full-time nurses receive a median net income of 1725 euros per month, people employed in other professions 1425 euros. 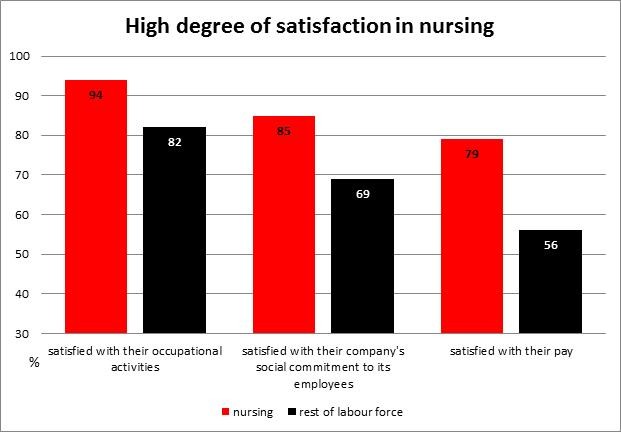 One third of them is working part time (less than 35 hours per week), as compared to one quarter of employees in the rest of the labour force. What has been noticeable is the increase in the level of education.

The proportion of nursing staff and medical-technical assistants who hold a university diploma has risen from seven to 27% since 2010. This has mainly been due to the increasing demands in these professions and to the new "Healthcare and Nursing" study programme offered at Austrian universities of applied sciences. Furthermore, 20% of those working in this field hold a high school diploma, and 42% graduated from a vocational school, business school or academic secondary school. The share of under  25 year olds in these jobs is low (8%), which is largely due to the duration of the required training.

Most of the categories surveyed for nursing and medical-technical professions within the scope of the Work Climate Index paint a positive picture. However, there are also segments where nurses assess their situation as being worse than that of employees active in other professions: 26% responded that they suffer from time pressure (versus 18% in the rest of the labour force), 32% consider their work to be emotionally and psychologically stressful (versus 10% in the rest of the labour force). As many as 14% feel stressed by technical and/or organizational changes (versus 7%).

Economic and socio-political discussions are accompanied by a cornucopia of figures and data, many of which are aimed at facilitating welfare cuts and curtailing distributive justice.

The Austrian Work Climate Index, however, is a benchmark for economic and social change as seen by employees. It examines their assessments with respect to society, company, work and expectations. Unlike the standard key indicators of economic development, the Work Climate Index captures the subjective dimension, expanding our knowledge about economic developments and their implications for society.

The Work Climate Index is calculated based on quarterly surveys among employees in Austria. The random sample of approx. 4,000 respondents each year is selected with a view to being representative so as to enable telling conclusions regarding the feelings and the wellbeing of all employees. Since the spring of 1997, the Work Climate Index has been calculated twice a year. There are also supplementary special evaluations.

For current results and background information, please visit www.arbeitsklima.at. There, you will find the comprehensive work climate database for evaluations. In addition, you can also calculate your personal job satisfaction index online within just a few minutes. Another online service is our Managers' Monitor. It provides answers to questions about the current job satisfaction level among Austria's managers.

Part time slows you down

The situation of female employees is barely improving

One quarter of female part-timers would love to work more. Among women aged 25 years and younger, even more than every third expressed that wish.

The Work Climate Index has also shown for years that the number of women who work part time significantly exceeds that of men. This is also due to the fact that women, far more often than men, have to reconcile child-minding duties with their jobs. According to the Work Climate Index, currently 42% of all female employees are part-timers. In the case of working mothers, this proportion is even at 60%. Regarding the question about the current contractually agreed working hours and the desired working hours, it has become apparent that one fourth of all female part-timers would like to work more hours than agreed under their respective employment contracts.

A detailed analysis shows that 26% of women who, under their employment contracts, have very few working hours (less than 12 hours per week), would like to work longer hours.

More than one third (35%) of younger female part-timers of ages 25 years and younger would like to work more hours per week. 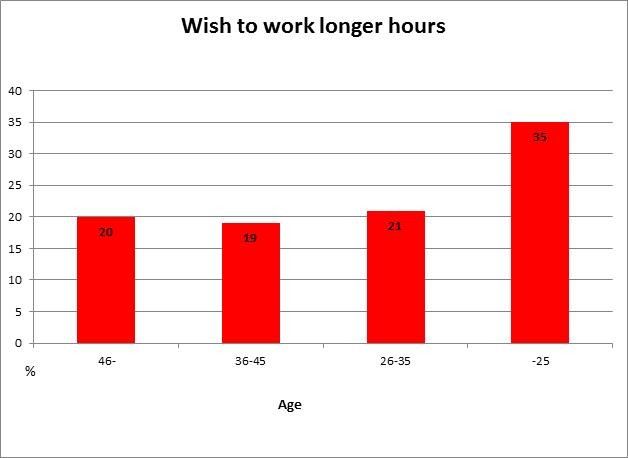 A right to full time?

Is part-time work for women really the big career decelerator that keeps them from earning higher salaries and retirement pensions? Yes it is, if they stay in such part-time jobs for many years.

In most cases, child minding and geriatric care at home are the main reasons why people find themselves in part-time work. Many women are even happy to have such a job. However, in the long term, this form of work becomes a problem for women. For, it is primarily women who take care of children and elderly or ill relatives at home while their full-time employed colleagues continue to climb up the career ladder. By doing so, they rise up the pay scale, which, under the current system, will earn them higher retirement pensions later on.

Many women want to work part time only temporarily. But in many cases, no full time positions are on offer, and then these women are stuck. In Germany, legislators want to make the right to full-time employment a law. This is a positive approach that could help many women escape the part-time trap.