The boundaries between home and work life are becoming blurred: around a third of employees take work home – even when they are on sick leave or on holiday.

And that is not all: 18 percent of employees work while on holiday and 14 percent work while on sick leave. Once again it is men who are more likely to be in this group, as also older and more highly educated people: almost 30 percent of people who have completed secondary education work during sick leave.

All-in contracts are all the rage now

All-in employment contracts mean that the line between work and home life is increasingly blurred. By the end of 2015, 24 percent of respondents worked on this type of contract, i.e. 800, 000 people in Austria. Two years earlier the proportion was 18 percent. Employees who are on this kind of contract often have to work more overtime than was initially agreed and they often get no financial compensation or compensatory time in return. The same goes for another 16 percent of employees receiving lump sum overtime payment.

Many people can’t take their mind off work

Being available 24/7 comes at a price: Only a quarter of people not taking work home suffer from sleep disorders, compared with 40 percent of those who do take work home. Taking their mind off work is a lot more difficult for them, because they bring problems home from the office. 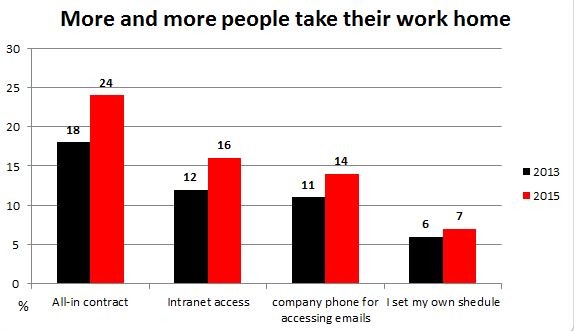 UNHAPPY WITH THEIR JOBS

The young see virtually no career or development  opportunities

Almost half of young employees who have completed their training want a career or job switch, since they think opportunities are virtually zero.

Youths and young adults under 25 face increasing pressure on the labour market: At the start of 2016, 54,082 youths were registered as unemployed and another 27,960 were on training programs for jobseekers. 6,145 people were looking for an apprentice position, while only 2,969 such positions were officially open. 39 percent of all youths with jobs have previously been unemployed. 23 percent of young people think they are at risk of losing their job.

No progress on the career ladder

The reasons for this are demographic developments and the increasing number of older workers. It is due to these people that the young cannot move up the career ladder. Cost pressure and economic uncertainty mean that employers stop offering promotion and pay rises and start giving young people temporary and marginal employment instead. This means, among other things, that 15 percent of all young adults who have completed their training cannot make a living, with more than half of them just about getting by.

Almost one in four Austrian employees is on an all-in agreement, i.e. a contract of employment foreseeing that all labour law entitlements are covered by a lump sum payment. This type of contract blurs the line between work and home life, simply because employees are always prepared to take on work ‒ while they are off work, on holiday or on sick leave.

All-in employment contracts usually come with nothing but disadvantages for employees. Employers normally provide a fixed base salary plus flat-rate overtime pay. When people work more overtime than was agreed in the contract, they usually get no compensation in return. That is why I am pleased to see that the changes in labour law the Chamber of Labour had long been advocating took effect on January 1, 2016, making all-in contracts more transparent. The notice of employment as a short contract version and the full contract of employment must now state the gross salary for a 40-hour workweek, for example.

Young people are losing their optimism

Young people in employment are losing their faith in future career opportunities because their situation at their workplaces and in the working world has deteriorated.

Satisfaction is usually higher among the young than among older people on the workforce, despite often precarious job conditions. The Work Climate Index of the 15 to 25-year old is currently at 109 points – three points higher than the index for the Austrian workforce in general; but this is still the all-time low of the past ten years. The reason: decreased satisfaction with the situation at the workplace and the labour situation in general.

While 68 percent of young people were happy with social attitude of their company vis-à-vis the employees in 2014, this number has dropped to 59 percent within a single year. Satisfaction about the leadership style of their superiors declined by five percentage points to 67 percent within one year. In 2015, only 72 percent of the 15- to 25-year old workforce was satisfied with type and content of their own occupational activity. In 2014, this percentage was still at 79 percent.

The rating of general conditions at work is declining also because young people are increasingly under pressure at work: 67 percent – which is eight percent less than last year – are happy about the regulation of working hours at their company. 39 percent experience at least medium stress caused by the constant pressure at work; 48 feel burdened by the time pressure at work.

Young people are also less optimistic about their future these days: Their expectations may still be more optimistic than those of older people in employment, but the index value still decreased from 65 to 62 points in just one year. For comparison: The value among the workforce of 45+ years is only 47 points.

The views of employees and workers are not given sufficient consideration in economic and socio-political discussion. One reason is that there is supposedly not enough substantiated data. The Austrian Work Climate Index has been providing this data for 18 years now and is a measure and yardstick for economic and social change from the point of view of the workforce. It explores their assessment of society, their workplace, work and their expectations. The Work Climate Index records the subjective dimension and thus contributes to the knowledge of economic developments and their consequences for society.

The Work Climate Index is calculated on the  basis of quarterly surveys conducted among gainfully employed people of Austria. The random sample of some 4,000 interviewees per year is representative so that relevant conclusions can be drawn for the state of all employees and workers. The Work Climate Index is established twice a year ever since spring 1997, and in addition special evaluations are also made.

For current results and background information please refer to ooe.arbeiterkammer.at/work_climate_index, where you will not only find the substantial work climate database that can be used for analysis purposes, but you can also check on your very personal satisfaction index within minutes. The Executives Monitor is also available online and answers the question of the satisfaction rate among Austrian management personnel.

84 percent of cleaning staff are women. With scarcely any promotion opportunities or development options they see their possibilities on the labour market as poor.

According to data of the trade union vida, some 40,000 people in Austria work in the cleaning sector - the number in the shadow economy is estimated to be ten times higher. Findings of the Work Climate Index show that 84% of the people working in this sector are women; an above-average proportion of them are from a migrant background; many of them have little qualification and over 50 percent are older than 45 years. The few male cleaners are almost exclusively in full-time employment, while two thirds of the women work part-time.

The Work Climate Index for cleaning personnel is 96 points (2010-2015), i.e. eleven points below the average of other sectors and professions. Only around a third of the people working in this sector say they are happy about their promotion and development opportunities and hardly a fourth is of the opinion that it is easy to find new acceptable employment if they lose their job. In other words: 77 percent believe that they would encounter difficulties on the labour market.

Not even half of them are happy with their income. For 57 percent it is barely sufficient to make ends meet, 21 cannot get by on their wage. The median income of cleaning personnel is 975 euros net per month. No wonder 36 of them worry that they will not be able to subsist on their pension.

Cleaning is not only poorly paid and offers hardly any promotion opportunities, it also barely meaningful and rarely varied work. It affects health and causes painful conditions. While more than a third of the workforce find their work fulfilling when all lines of industry are taken together, the percentage is a mere 24 percent for cleaning personnel. Only one out of five finds the job varied, 17 percent say it is always the same rut.

Cleaning personnel feel less healthy than people working in other jobs. 37 percent of those working in the cleaning sector suffer from pain in the legs, their main health concern. What makes this situation worse is that less than a quarter of the people working in cleaning have access to health provisions. They are left alone with their health problems - which is one of the reasons why two thirds do not think that they will be able to do this work until retirement.