After a low in 2016, employees in trade - two thirds of them female - are more satisfied again due to the economic upswing.

As a consequence of the economic crisis in the years 2008 and 2009 the job satisfaction of some 400,000 commercial employees in Austria slumped dramatically. After a temporary recovery in the subsequent years it reached a new low of 105 points in 2016. In the first half of 2017, however, the first consequences of the economic upswing made an impact: since then the index has been on the rise again

Employees in trade are more optimistic again as regards the economic development of the country and the companies; they are more satisfied with their superiors and see better career prospects and more opportunities on the labour market than in the previous years. In terms of mental and physical stress, too, the situation has improved. More than two thirds think that they will remain healthy enough to hang on until retirement. This is ten percent more than the average of all sectors.

The reasons for not being able to hang on until retirement are mainly of physical nature: on the one hand, commercial employees struggle with physical burdens, on the other hand, the work is also exhausting. Mental stress is on a similarly high level as in other sectors.

The main stressor in trade is the permanent contact with customers. It bothers almost twice as many employees as on average across all sectors. Almost every fifth complains about high concentration, high responsibility, or

prolonged standing. Employees in trade suffer more than the average from being constantly monitored and supervised, exposed to artificial light and insufficient opportunities to retreat.

Working on Saturdays is commonplace

Two thirds of the employees in trade have to work on Saturdays, almost 30 percent even frequently. Working on Sundays, however, is not (yet) an issue: only every twentieth has to work on Sundays, at least on rare occasions.

Taking a look at the individual jobs within the sector reveals some significant differences: the job satisfaction of  shelf stackers is ten points lower than that of the other employees in trade. Cashiers and specialized shop assistants are a little better off, but they, too, are below the average of the sector. The most satisfied group are commercial employees working in Offices. 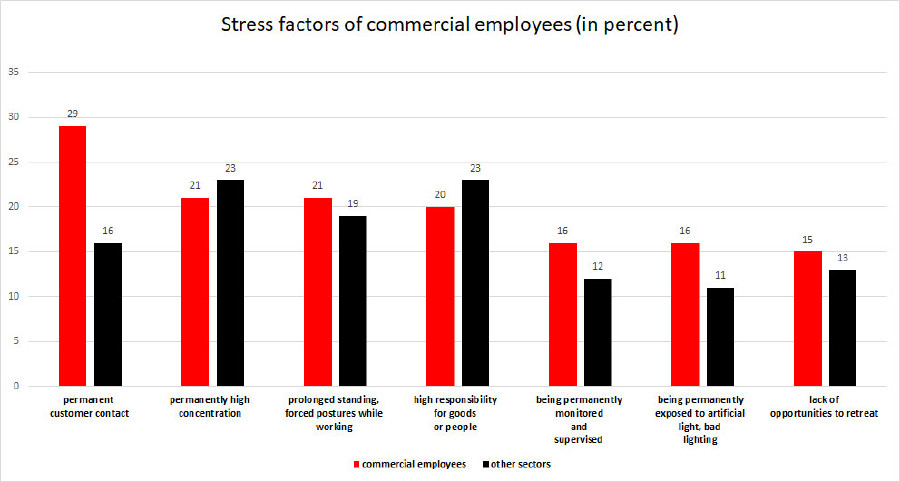 APPRENTICESHIP - A STEPPING STONE FOR A CAREER

The number of commercial apprentices is declining

The trading sector is still one of the most important providers of apprenticeship training. Some 15,000 young people are currently serving an apprenticeship in retail or wholesale.

Satisfied with what they do

Dissatisfied with what they earn 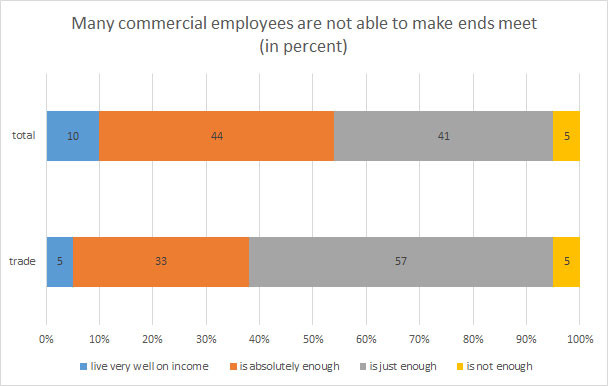 For almost two thirds of the - mainly female - employees in trade it is hard or even impossible to make ends meet. In all other sectors and professions, this ratio is 45 percent. Accordingly, employees in trade are clearly less satisfied with income than the average across all sectors. This is not only due to the high part-time rate but also due to the insufficient hourly wages.

Therefore, it is all the more important that the social partners have agreed on a minimum wage of 1500 euros, which is mainly to the benefit of employees in low-pay sectors such as trade. Considering the ongoing inflation, an increase to 1700 euros will be required in the medium term. Moreover, given the economic upswing, it would only be fair to agree on substantial increases in wages and salaries in the upcoming collective bargaining.

Because employees in trade deserve being paid decently. Especially the weeks before Christmas will demand a lot from them.

Over two decades, the social researchers of IFES and SORA have gathered and interpreted some 100,000 data sets on behalf of the Upper Austrian Chamber of Labour. 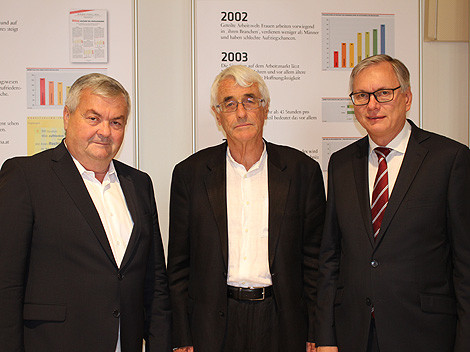 In the past 20 years, the interviewers of IFES travelled approximately two million kilometres to visit employees at their homes - this is 50 times the circumference of the earth. In the interviews, which lasted three million minutes and/or 5.7 years altogether, they collected some 100,000 data sets. Thus, the social researchers of SORA have an extremely broad and reliable database available for evaluating and preparing the individual topics on behalf of the Chamber of Labour.

In the beginning, the index was determined to be 100 points. It reached an all-time high with a value of 112 points in the year 2007, i.e. at the time of economic boom. In the first half of 2016, the index dropped to a record low of 105 points. What slumped most dramatically at that time was the optimism regarding the future of the companies people worked for and the Austrian economy in general. Over the past few months, the Work Climate Index has recovered, being 109 points at present.

In the economic and socio-political discussions far too little attention is paid to the employees' view. This may also be due to the fact that, allegedly, insufficient solid data are available. For 20 years, the Austrian Work Climate Index has been supplying these data, and it has thus become a benchmark for economic and social change from the employees' point of view. It examines their assessments with respect to society, company, work and expectations. The Work Climate Index captures the subjective dimension, thus expanding the knowledge of economic developments and their implications for society.

For five years, job satisfaction in Luxembourg has been measured by the “Quality of Work Index”, which was modelled on the Work Climate Index.

In 2012, the “Quality of Work Index Luxembourg” was launched. Since then, we have collected data about the experienced quality of work and the health statuses through representative samples of more than 1500 employees, each, in Luxembourg (including commuters from France, Belgium, and Germany) every year.

This instrument allows us to compare groups of employees in different occupational groups, for examples by age categories, by gender and family situations, or by neighbourhoods and origins of employees. The high number of cross-border commuters is a special feature of the Luxembourg labour market. One of the difficulties we had to overcome was the multilingualism of employees in Luxembourg. As a result, we have meanwhile created five language versions of the same questionnaire (Luxembourgian, German, French, Portugese, English).

Without the inspiration and orientation guide of our big model, the Work Climate Index, the starting phase would certainly have been more difficult and arduous. All the best for the twentieth anniversary!

THE WORK CLIMATE INDEX AS A PIONEER

About seven years ago, we of the Chamber of Employees Luxembourg (Chambre des salariés Luxembourg, CSL) became convinced that we needed an instrument to identify and track the trends and changes in the working world in terms of the quality of work and the health of employees. When we were looking for an existing project pursuing similar objectives we came across the Work Climate Index as an instrument that was unique in Europe.

The Work Climate Index is very popular with trade unions, employers, the public, the media, and politics. It is often quoted by other Austrian and European institutions (e.g. Eurofound in Dublin), and its data are used in numerous studies.

Together with the University of Luxembourg as our scientific partner we started to realize a national study considering country-specific characteristics. What we aimed at was a structured representation based on work science of how working people experience their jobs, and to thus provide material for sociopolitical issues to be discussed more constructively.