The working atmosphere plays an important role for the job satisfaction of employees. The quality and leadership of the superiors carry a lot of weight.

Once again in the same company? Not necessarily!

Loyalty towards the company has often been considered as an obligation to be delivered by employees. In this respect, a lot has changed since the year 2000: back then 46 percent of the employees answered that they "absolutely" wanted to work in the same company again; now this value is only 32 percent (white- collar workers 34 percent, blue-collar workers 29 percent).

Leadership and the working environment are often associated with loyalty towards the company. All in all, 83 percent of the employees who are very or quite satisfied with their superiors say they would "absolutely" or "rather" start working in the same company again, compared to only 43 percent of those only moderately or not satisfied with leadership. One of the consequences employees draw from dissatisfaction: almost every fifth (18 percent) who is unhappy with leadership wants to leave the company in the near future.

Superiors are often under pressure themselves, mainly those of the middle management level, i.e. those in a so-called "sandwich position". According to the Executive Monitor Report 21 percent of the executives consider it as a challenge to organize their time properly. 22 percent struggle to cope with the demands of owners or superiors and find it difficult not to allow their health to be affected by work. Motivating employees, too, has meanwhile become a challenge for 23 percent of all executives.

Differences based on size

The size of the company also makes a difference when it comes to assessing the working atmosphere. 74 percent  of the employees in smaller enterprises (up to 19 employees) are satisfied with leadership - compared to only 69 percent in larger companies with more than 100 employees. 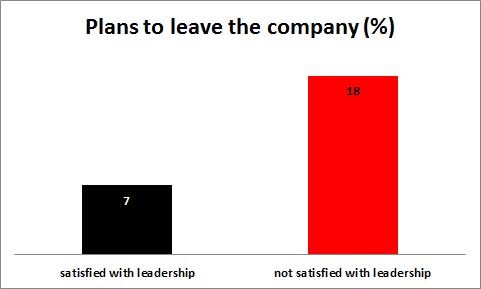 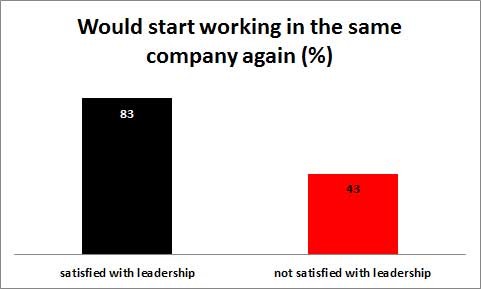 The mood in enterprises, often called working atmosphere, is composed of several factors. In our long-term study, the Austrian Work Climate Index, we often ask employees how satisfied they are with their superiors and colleagues, and with their creative scopes and the options for participation in their jobs.

Employees are better off in companies with works councils and youth liaison officers. Internal representation and participation, however, are not only beneficial for employees, but in the long run also for enterprises. Because satisfied employees are more motivated, which eventually also benefits the company.

The Chamber of Labour campaigns for the extension of employee participation in companies. For example, it is still difficult for members of the works councils to assert themselves in terms of promotion schemes for women or of agency workers, as they still have too little say in this respect.

Satisfaction with the mood in companies has declined

Beside leadership, satisfaction with colleagues as well as the creative scope and options for participation play an important role for job satisfaction.

Although satisfaction with colleagues has declined by seven percent over the past 15 years, it is still high, reaching a value of 85 percent. Among the employees who are not happy with their relationship with colleagues, 26 percent say that they suffer strongly, rather strongly or moderately from loneliness and isolation at work. 45 percent feel lonely and isolated at least occasionally. Only 39 percent of those not satisfied with their relationship with colleagues would start working in the same company again. 19 percent plan to leave the company.

More than one third unhappy with wage or salary

More than one half of the employees say that they cannot or hardly make ends meet. An alarming development.

Over the past 15 years, the share of employees regarding their incomes as not sufficient has always been between six and eight percent.  But: at present already 46 percent say that they barely get by. In the year 2000, only 36 percent said so. These figures corroborate the importance of a wage tax reform that results in higher net incomes for working people.

Employees in tourism are unsatisfied

This comes as no big surprise: civil servants and employees in the financial and banking sector are also most frequently satisfied with their social protection. Once again, those employed in business services (e.g. cleaning personnel, hairdressers/beauticians) and in tourism are least satisfied. 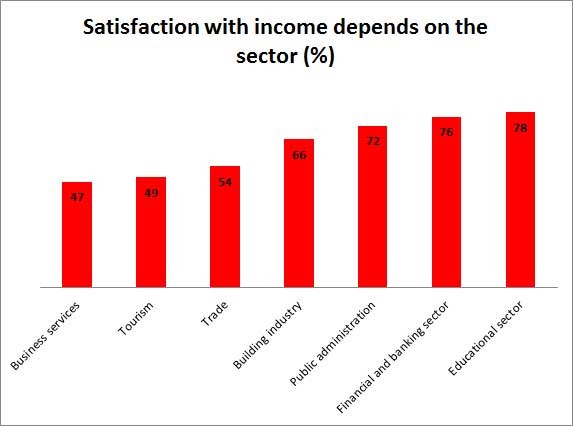 In the economic and socio-political discussions far too little attention is paid to the employees' view. This may also be due to the fact that, allegedly, there are insufficient solid data. For more than 15 years the Austrian Work Climate Index has been supplying these data, and it has thus become a benchmark for economic and social change from the employees' point of view. It examines their assessment with respect to society, company, work and expectations. The Work Climate Index captures the subjective dimension, thus expanding the knowledge of economic developments and their implications for society.

For current results and background information please refer to ooe.arbeiterkammer.at/arbeitsklima. There you will not only find the comprehensive Work Climate Index database for evaluation, but it’s also possible to calculate your personal satisfaction index with your workplace online within just a few minutes. You will also find the Executive Monitor Report online, which deals with the question how satisfied Austrian executives are with their work.

The Work Climate Index is a proven tool for the Chamber of Labour to analyse the situation of employees, which can be applied not only on the Austrian national level, but also on the level of individual companies. The mood among the personnel is crucial for an enterprise and is therefore of great interest to members of works councils, safety liaison officers or HR people. Questions regarding satisfaction with working hours, stress in the job or the assessment of job security and career have a considerable effect on the atmosphere in a company. The Work Climate Index can be used to establish and analyse all these factors for individual enterprises.

Data as a basis for measures

The employees are questioned, the data are analysed and presented. Thus it is possible to take well-directed measures to improve conditions at work. Depending on the structure of the company, various age groups, the employees of individual departments, or males and females can be questioned and their answers evaluated. Find more information at: ooe.arbeiterkammer.at/arbeitsklima

The bigger the company, the more likely it is that employee representation is in place. But: the share of employees represented by a works council has decreased since the year 2000.

In tourism and in the sector of business services less than 30 percent of the employees are represented by a representation body. Both sectors are also characterized by a high share of small companies, which, in turn, are those least frequently having works councils in place.

Vice versa, the share of employees represented by a staff council is highest in sectors with more medium-sized and larger overall operations: in trade and industry, in the financial and banking sector, in traffic and communications.

Fewer employees - mainly blue-collar and white-collar workers - have works councils in their companies: while the share was still 63 percent in the year 2000, it is only 55 at the beginning of  2015. This means that only just a little more than every other employee in Austria is represented by a works council in his/her company, excepting the public sector, where approximately 90 percent may rely on an employee representation body. As regards more internal participation, there is also still some potential and a wide range of activities left to be done in many enterprises. 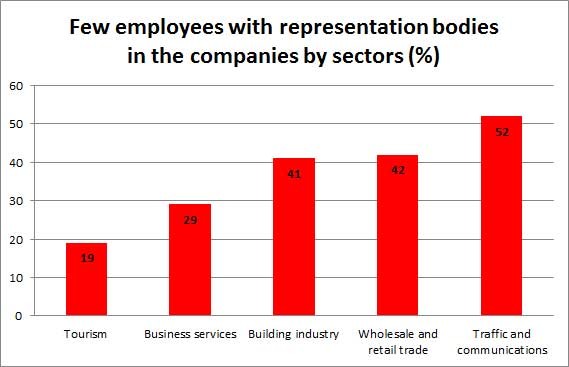 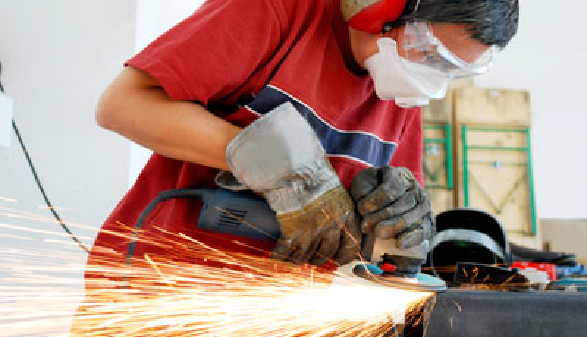