Almost half of the working people hardly get by

In the past two years, the employees’ satisfaction with their incomes has increased. This development, however, does not hold true for all employees.

In the years 2016 and 2017, the number of employees just barely or not getting by has declined significantly, with a share of 55 percent in 2015 compared to “only” more than 48 and/or 47 percent in the two succeeding years. But still, this means that almost half of the people do not know how to make ends meet.

Job starters are faced with difficulties

Living on their incomes is easiest for employees between 36 and 50 years of age and hardest for younger people between 21 and 30. This means that job starters have more often problems to live on their incomes alone than older employees. Beside age, there are also other factors playing a role, namely the level of education, origin, the province, and gender. Well educated males without a migration background resident in Vorarlberg, Tyrol, Upper Austria or Carinthia would sooner be able to live on their incomes than low-skilled employees, females, people with a migration background or employees living in Salzburg, Burgenland, or Vienna.

There is still a big gap between the sexes: on average, women earn clearly less than men and have a harder time making ends meet. Some of the reasons are the unequal distribution of gainful and domestic work, the substantially higher share of part time employments among women, as well as a distinct segregation by sectors in the labour market. This means that women more frequently work in lines of business where salaries and wages are lower.

Single women and single mothers are most likely to get caught in the poverty trap: two thirds of all divorced or separated women as well as seven out of ten single mothers are unable to live on their earned incomes. But even women living with a long-term partner often earn clearly less than men because many of them reduce working hours to take care of children or dependent elderlies, or to do the majority of the domestic work.

Of course, the sector plays a major role, too: for two thirds of the employees in trade, in the cleaning business or in tourism it’s hard or even impossible to make ends meet, whereas this is most likely to be achieved for employees working in education or in public Administration. 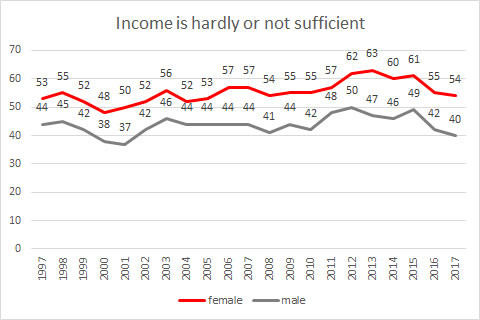 Two thirds of the working people are satisfied with their income

Between 2012 and 2017, employees in Austria have become clearly more satisfied with their incomes. Whereas six out of ten respondents said that they were content with their salaries or wages five years ago, almost two thirds say so in 2017.

Women, younger people and low-skilled employees are clearly less frequently satisfied with their incomes than men, elderly persons and people with A levels or a university degree. Independent contractors are least satisfied: only 42 percent of them are explicitly contented with what they earn. Among the white-collar employees the share is 67 percent, and even 89 percent among officials in public administration.

72 percent of the men are satisfied, compared to 62 percent of the women. Only 53 percent of those with only compulsory schooling say that they are content with their incomes. On the other hand, there are 75 percent satisfied employees with A levels and 71 percent satisfied graduates of a university. Working hours, too, play an important role: among the part-time employees working less than 35 hours per week only 54 percent are satisfied, compared to seven out of ten people working full time. Unsurprisingly, employees in trade and in tourism are more discontented with their incomes than people working in public administration or in education. 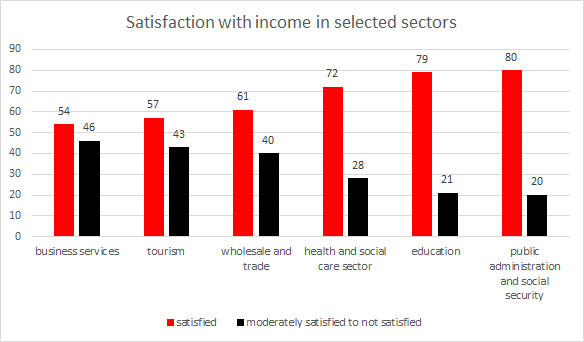 Evidently, the tax reform has started to have an impact on employees’ wallets: over the last two years, the share of those easily living on their incomes has increased distinctly. Even satisfaction with wages and salaries is higher than it has been in a long time, so the current Work Climate Index says.

This development, however, must not hide the fact that income is still not distributed fairly, and that almost half of the employees are unable to make ends meet with what they earn. More and more poorly paid employments cause the wage share to stagnate and medium real income to decline.

Therefore, beside the tax reform, the social partners’ agreement regarding a minimum wage of 1500 euros was a very important step. In the medium term, this minimum wage must be increased to 1700 euros. The economic recovery should be taken as an opportunity to negotiate substantial increases in wages and salaries in the upcoming collective bargaining. Because employees deserve being treated decently and paid properly for what they achieve day after day. They are by far the most important performers in our country - a circumstance which has to be reflected in fair remuneration and further tax relief.

VOCATIONAL COLLEGE AS A STEPPING STONE

Graduates of commercial or technical colleges are satisfied and optimistic

Technical employees who graduated from a technical college are satisfied in their jobs.

Graduates of commercial or technical colleges are much in demand: the combination of vocational and practical teaching contents with general schooling is a good basis for starting a career - and for high satisfaction in the job. While the job satisfaction over all employees measured by means of the Work Climate Index is currently 108 index points, people with A levels obtained from a vocational college reach a value of 115 points. This is the highest index of all education groups.

The number of vocational college graduates is especially high in Upper Austria, Salzburg and eastern Austria. The majority of them are male and don’t have a migration background. After vocational college, almost 80 percent of them work as white-collar employees. Three out of ten are employed as office workers, 13 percent as technicians, a little more than ten percent in the finance and insurance sector.

The high job satisfaction of graduates of commercial or technical colleges is based on high satisfaction values in almost all partial indexes: they assess the images of their companies and their social statuses to be higher than the average of all employees; they are satisfied with their timing and estimate their job prospects and career opportunities very optimistically. All this results in an above-average satisfaction with life.

Critical view to the future

In the economic and socio-political discussions far too little attention is paid to the employees' view. This may also be due to the fact that, allegedly, there are insufficient solid data. For almost 20 years, the Austrian Work Climate Index has been supplying these data, and it has thus become a benchmark for economic and social change from the employees' point of view. It examines their assessment with respect to society, company, work and expectations. The Work Climate Index captures the subjective dimension, thus expanding the knowledge of economic developments and their implications for society.

The calculation of the Work Climate Index is based on quarterly surveys taken among Austrian employees. The random sample of approx. 4000 respondents each year is representative so as to enable telling conclusions regarding the mental state of all employees. Since the spring of 1997, the Work Climate Index has been calculated and published twice a year. There are also supplementary special Evaluations.

For current results and background information please refer to ooe.arbeiterkammer.at/arbeitsklima. There you will not only find the comprehensive work climate database for evaluation, but it is also possible to calculate your personal satisfaction index with your workplace online within just a few minutes. You will also find the Executive Monitor Report online, which deals with the question of how satisfied Austrian executives are with their work.

Four out of ten employees have completed an apprenticeship

Young women and men still tend to opt for a few specific apprenticeship trades. More and more, public administration remains out of reach for people with completed apprenticeship.

Since the 1980s, the number of students attending apprentice schools has been declining gradually. In the school year 2015/16 a little more than 117,000 young people were training as apprentices, 58 percent of which were male. 41 percent of all employees in Austria have completed an apprenticeship.

Apprenticeship is still concentrated in just a few trades. According to the apprenticeship statistics, these trades are “machines/vehicles/metal”, “office/distributive trades/finances”, “construction/architecture/building technology”, as well as “electrical engineering/electronics”. The number of apprentices in tourism is declining rapidly. 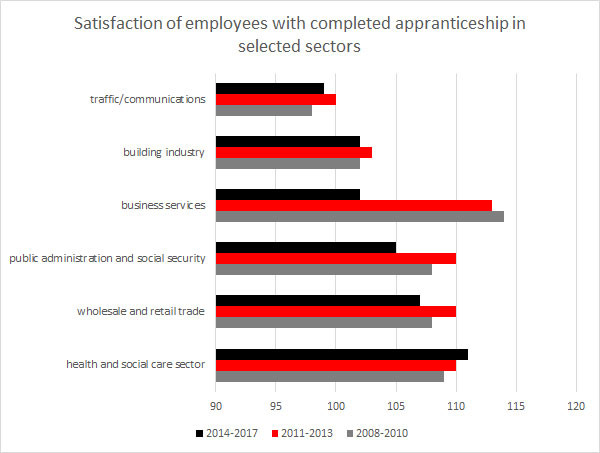 The satisfaction of employees who have completed an apprenticeship is in line with the average level, though there are major differences between the individual sectors and occupational groups. Satisfaction is highest in the health and social care sector, it is lowest in traffic/communications. In the field of business services, job satisfaction has slumped by twelve index points since the years 2008-2010.

Considered by partial indexes, the satisfaction of employees with completed apprenticeship hardly deviates from the average of all employees in Austria. Only in terms of physical stress - i.e. burdens on the body - there is one significant difference: while the index value of all employees is 19 points and eleven points in case of graduates of commercial and technical colleges, people with completed apprenticeship reach an index value of 23 points.

The risk to become unemployed is relatively high in case of employees with completed apprenticeship: 47 percent of them have already once lost their jobs. This share is only higher in the group of people with just minimum compulsory schooling (56 percent).