The Work Climate Index shows the dramatic extent of job dissatisfaction among agency workers. One of the main problems is the frequently low pay.

Meanwhile, contract work has become commonplace also on the Austrian labour market. According to the ministry for social affairs 146,972 people in Austria were hired out as workers for at least one day in the period from July 2013 to June 2014. Especially in economically unstable times enterprises tend to use agency workers as a kind of "second staff". In times of crisis they are the first to be made redundant again. This is what's happening again right now: the latest unemployment statistics have revealed that the most significant rise of unemployment is among the leased employees (plus 14.4 percent compared to last year). All too often, agency workers rank among the marginal workforce in the companies of this country.

The Chamber of Labour and the trade unions have enforced a lot of legal improvements, mainly through a separate wage agreement for agency workers. The most important aspect is the principle stipulating that the best minimum wage shall apply. This means that depending on the sector to which someone is hired out he or she has to get the wage/salary that the colleagues in the respective employing company earn according to their wage agreement. However, if the wages/salaries of the wage agreement of the employing company are below the minimum remuneration of the wage agreement for temporary employment, then those of the latter shall apply. What is important: this applies both during the leasing relationship and in times during which a person is not hired out. During "idle time periods", agency workers are entitled to the average remuneration of the past 13 weeks. Any unilateral holiday arrangement of the employer during an "idle time period" is not permitted.

In spite of these improvements the Work Climate Index has shown that there are some major aspects where agency workers are more dissatisfied than conventional employees. Fewer and fewer agency workers - only 31 percent at the moment - are satisfied with their rights. 27 percent of all agency workers say that they are unable to make ends meet. Another 52 percent only just get by with their income. By comparison: among the other employees "only" 10 percent say that they cannot make ends meet and 45 percent barely get by.

13 percent of full-time agency workers still earn less than 1,000 euros net per month, among the rest of the full-time employees this share is only half as high. As a logical consequence, agency workers are often dissatisfied with their income: only 8 percent are absolutely satisfied, another 15 percent at least "rather" satisfied. By comparison: among the rest of the employees a total of 57 percent are satisfied with what they are paid. 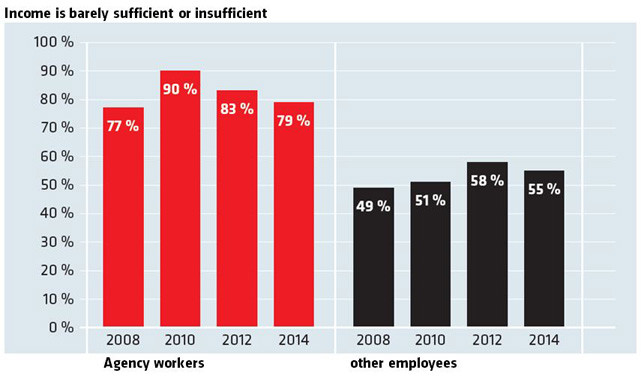 The income situation and the difficult job situation dramatically reduce the life satisfaction of agency workers.

Currently, only a little more than one third (36 percent) of the agency workers are satisfied with their social protection. Compared to 2013, this share has declined by 8 percent. By comparison: among those conventionally employed satisfaction with social protection is 66 percent, the value remaining constant at this level.

Pessimism and high stress at the workplace

At present, only 56 percent of agency workers are satisfied with their lives.

In the years 2009 and 2011/12 life satisfaction was temporarily even below 50 percent. One of the main reasons for this is constant uncertainty: 44 percent of the agency workers think that their jobs are little secure or even insecure. They see themselves as the "reserve volume" of the enterprises. More than one in two agency workers perceive the social attitude of the company towards its employees as unsatisfactory. And not even half of the agency workers are satisfied with the leadership of their superiors, only two third of them with their relationships to colleagues.

Health-related stress of agency workers is very high. They suffer not only from bad health conditions and pressure of time, but also from other stress such as permanent pressure of work, technical and organizational changes, as well as loneliness and isolation at work. 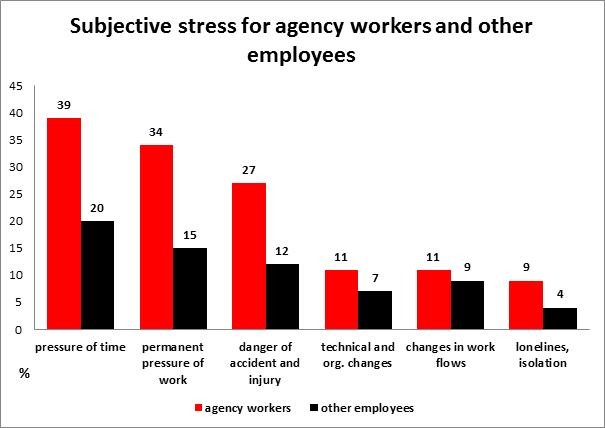 Neither the Chamber of Labour nor the trade unions are really happy with temporary work. However, we have to accept this form of employment as a reality while trying to achieve as many improvements as possible for agency workers.

As regards the remuneration we can boast some tangible success. The most important one: the better minimum wage shall apply. The impact of this measure on the income situation of agency workers is left to be shown by future data of the Work Climate Index. And there are other legal improvements, e.g. in terms of "idle time periods". Even so, many agency workers say that they can't live on their income or they are not satisfied with it. To us, this means we must not stop trying to improve the income situation of these employees.

The Chamber of Labour aims at reducing the number of people dependent on temporary work. Personnel leasing must remain an exception. To this end, the share of agency workers in companies should be limited to 10 percent.

As a matter of course, blue-collar and white-collar workers experience different kinds of physical stress in their jobs. But stress it not only a white-collar phenomenon.

Opportunities for promotion and development

Hanging on till retirement

In the economic and socio-political discussions far too little attention is paid to the employees' view. This may also be due to the fact that, allegedly, there are insufficient solid data. For more than 15 years the Austrian Work Climate Index has been supplying these data, and it has thus become a benchmark for economic and social change from the employees' point of view. It examines their assessment with respect to society, company, work and expectations. The Work Climate Index captures the subjective dimension, thus expanding the knowledge of economic developments and their implications for society.

For current results and background information please refer to ooe.arbeiterkammer.at/arbeitsklima. There you will not only find the comprehensive Work Climate Index database for evaluation, but it’s also possible to calculate your personal satisfaction index with your workplace online within just a few minutes. You will also find the Executive Monitor Report online, which deals with the question how satisfied Austrian executives are with their work.

Poor prespects for the second generation

The difficulties that migrants of the second generation are frequently faced with are first reflected in work satisfaction: migrant employees born in Austria reach a value of only 100 points in the Work Climate Index - this is 6 points below the average of all employees.

Still underprivileged in many ways

The second generation of the migrants living in this country feel considerably disadvantaged in terms of income, further training, employee participation, or promotion prospects. Only 59 percent of these second-generation employees are satisfied with their social positions - among the employees without a migration background this value is 70 percent.

How different the promotion prospects are for the different groups of origin becomes particularly obvious when looking at the changed shares of migrants in executive positions: both first and second-generation migrants with a Turkish or Serbo-Croatian background have equally poor chances to gain a leading position, whereas the share of leading employees among second-generation migrants from Western and Eastern Europe is two to three times higher.

Generally, migrants assess their job opportunities more pessimistically. Moreover, there are differences depending on the migrants' origins.

In the period from 2010 to 2014 migrants in Vienna were most dissatisfied with their career prospects. Generally, satisfaction is the higher, the smaller the place of residence. Only 23 percent of the blue-collar workers with a migration background are satisfied with their chances. But also white-collar workers and civil servants with a migration background see fewer development opportunities in their jobs.

In Austria, the labour market for migrants is still highly segmented: the hotel business features the highest share of employees with a migration background (36 percent), followed by the textile sector (35 percent), the cultural, sports and entertainment sector (31 percent), and the building industry (24 percent). What is conspicuous is that employees from Eastern or Western Europe are more often white-collar employees or civil servants, whereas more than half of the employees with origins in Turkey or Former Yugoslavia are blue-collar workers. One third of the employees with a Serbo-Croatian migration background have only minimum compulsory schooling, among migrants with Turkish origin this share is even as high as 57 percent.

Social advancement often proves to be difficult for employees with Turkish or Serbo-Croatian roots: certainly, the share of blue-collar workers is lower in the second generation, but with over 40 percent it is still the highest in these two groups of origin. 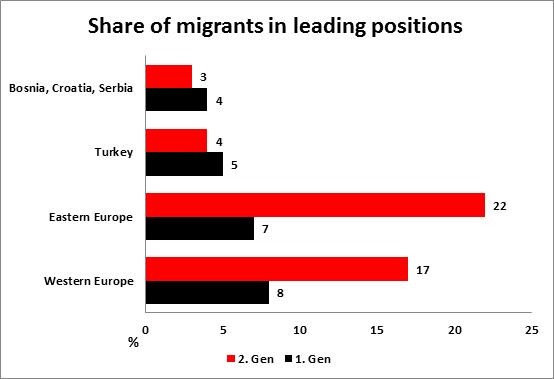 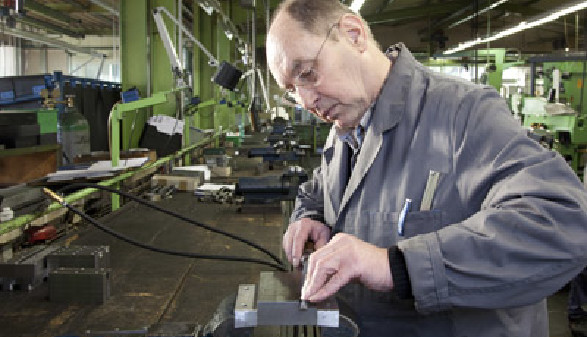