The financial and economic crisis has reshaped the labour market since the year 2008. More and more employees have to accept atypical forms of employment.

The share of permanent full-time employees has dropped from 74 to 68 percent since 2008. In that year, 26 percent of the wage earners were working either part-time (on a temporary or permanent basis), as agency workers, as marginal employees or as independent contractors. These forms of employment are often called "atypical". In 2013/14 as many as 32 percent of all wage earners were working in such jobs.

The biggest group in this field are permanent part-time employees (16 percent), followed by six percent who are marginally employed. Four percent are agency workers, three percent independent contractors. A total of three percent are temporarily employed (full-time or part-time). Compared to 2008, part-time employments have increased as have marginal employments and contract work. Thus, in late 2008 there were a little more than 900,000 atypically employed wage earners in Austria. Five years later, this figure has grown by almost 250,000 (1.2 million people). Basically, the increase in employment in Austria is almost entirely due to atypical jobs, while normal employment relationships become more and more uncommon. Those holding a normal appointment are most likely men in higher positions and without a migration background.

The number of women in atypical employments is clearly higher than that of men. Half of the women between 31 and 45 years of age are atypically employed, compared to only 16 percent of the men in this age group. Moreover, women are three times more often marginally employed (nine percent) than men (three percent).

Low-skilled employees are more often to be found in temporary full-time jobs and as agency workers, those with higher qualifications, however, in temporary part-time jobs and as independent contractors. One conspicuous aspect is that 44 percent of the migrants are atypically employed, mainly as agency workers (15 percent). In Vienna, Carinthia and Salzburg the share of atypical employees is slightly above the average.

The sectors with a higher share of atypical workers are the catering trade, the service sector, the cultural industry, as well as the health and social care sector. 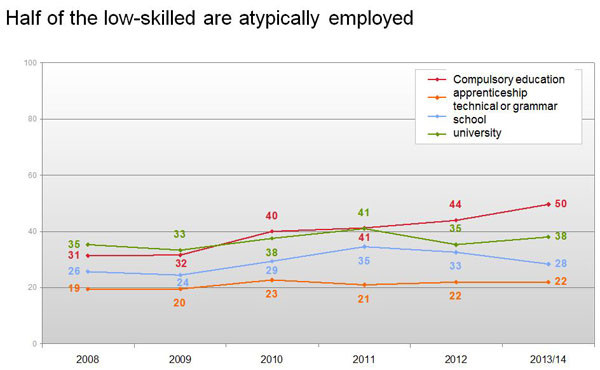 The problem is that jobs for the low-skilled are scarce. People with low qualifications are clearly more often unemployed and have a harder time finding new jobs. The data of the Work Climate Index have shown: for people with a low level of education and low professional qualification have more difficulty finding a permanent full-time job. As a matter of fact, this kind of jobs is becoming more and more scarce. Therefore, with increasing frequency the low-skilled have to put up with atypical forms of employment, especially with contract work - belittled as "temporary work" - if they don't want to become or stay unemployed.

Hardly any prospects for atypical employees

Part-time or marginal employments, temporary jobs and, above all, jobs as agency worker are often eulogized as flexibility of the labour market or as a chance for so-called risk groups to get into the labour market. But the question is: do such jobs offer a long-term prospect?

Those concerned keep it in perspective: atypical employees assess their chances on the labour market and their career prospects as clearly worse; they are considerably less satisfied with their income and can more rarely make ends meet; they are unhappy about their social protection; their life and job satisfaction is lower; they are less satisfied with company benefits and clearly more pessimistic as regards the economic future of  their companies, the country and their social statuses.

Atypical employees not only assess their jobs as being less secure (84 percent) than people in normal employments (90 percent), but they are also more pessimistic as regards their prospects of finding a new job if they lose the one they have. Satisfaction with schemes for further training (55 percent) as well as the opportunities for promotion and development (46 percent) is clearly lower among the atypical employees, mainly among the agency workers.

One third of the atypical employees say they will not be able to live on their retirement pensions; even now 18 percent are unable to live on their incomes alone. This applies mainly to those marginally employed, to independent contractors and agency workers. Income satisfaction is only at 46 percent; the median income is 975 euros net/month. All this suggests that atypical employment may probably be a short-term prospect of employment mainly for the unemployed, but that it cannot be regarded as a stable and acceptable form of employment in the long run. 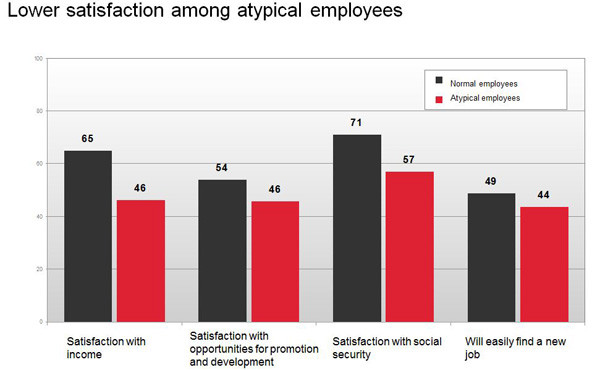 In some respects, employees in bigger companies are more satisfied than those in smaller ones. But the latter have their positive aspects, too.

Employees in large firms are more satisfied in some respects.

The Work Climate Index has shown that the share of wage earners in small companies has clearly increased while it has decreased in medium-scale and large enterprises. In terms of job satisfaction, the size of the company is mostly related to income and the experience of mental stress.

Pressure of time and other stress

28 percent of those working in large firms complain about pressure of time, compared to only 15 percent in smaller companies. Mental and organizational stress, too, is higher in large concerns than in small firms. The opportunity of co-determination, however, is less pronounced in large-scale operations than in small businesses. On the other hand, according to the Austrian Employee Health Monitor 69 percent of the employees in large firms benefit from one or more health promotion measures, compared to only 35 percent in small enterprises.

Economic and socio-political discussions are full of figures and data that seldom consider the employees' point of view. The Austrian Work Climate Index is a benchmark for economic and social change from the point of view of the employees. It examines their assessment with respect to society, company, work and expectations. Other than the usual key figures regarding economic development, the Work Climate Index captures the subjective dimension, expanding the knowledge of economic developments and their implications for society.

For current results and background information please refer to www.arbeitsklima.at There you will not only find the comprehensive work climate database for evaluation, but it is also possible to calculate your personal satisfaction index with your workplace online within just a few minutes. You will also find the Executive Monitor Report online, which deals with the question how satisfied Austrian executives are with their work.

Working in the construction business

Construction workers (who are mostly male) are often exposed to high physical stress. 28 percent of those working in the building industry feel highly stressed or rather highly stressed because of the danger of accident and injury. 30 percent complain about bad conditions for health: not even half of them think they will be able to do their jobs until the age of 65.

Fear of losing the job?

The labour market in building is subject to strong seasonal fluctuations. The employees are more or less used to this.  Moreover, the financial and economic crisis of the past few years has left its marks, and even large firms became insolvent. Thus, only 16 percent of those working in the construction trade are currently very sure of their jobs, 65 percent are at least rather sure. In the other industries 24 percent are very sure of their jobs, and 65 percent, too, are rather sure.

16 percent of those employed in the construction industry were unemployed in the past 12 months. Moreover, 44 percent have already experienced phases of unemployment in their employment career up to now, compared to 37 percent of the other employees saying so. More than half (53 percent) of the construction workers think that it will be difficult to find a new job if they lose their old one. 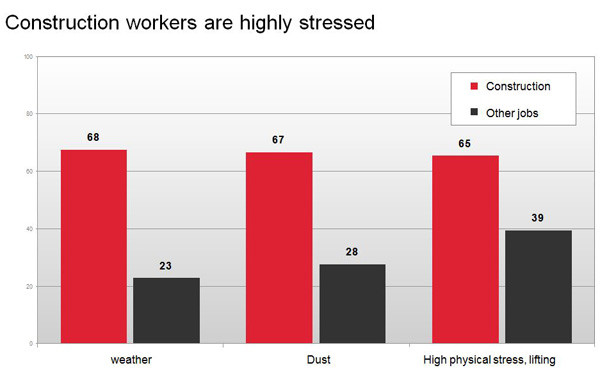 Compared to the Work Climate Index evaluation for the building industry from three years ago, the values are only slightly better or even worse. In the year 2011, the index value for the construction trade was 101 points, currently it is 104. The difference is particularly pronounced when it comes to the partial indexes "work" (minus four points) as well as "company" and "expectations" (minus three points). Accordingly, employees in the building industry are less satisfied with the situation in their companies, with work per se and with their future prospects than employees in the other industries.

Traditionally, the share of migrants in the construction trade is higher than in many other industries. Currently, 21 percent of those working in the building industry have a migration background.