Atypical employments are on the rise

In 2016, about 216,000 people in Austria worked in the accommodation and catering sector - 14 percent more than ten years ago. This increase is largely due to an increase in atypical employments. Between 2008 and 2015, the number of marginal employees in tourism grew by almost 61 percent. Meanwhile, one quarter work in marginal employments, more than 40 percent work part-time.

More than half of the employees are female, almost half are younger than 35 years. One quarter have only minimum compulsory schooling, 37 percent have completed an apprenticeship, eleven percent have an intermediate school leaving certificate, and a little more than one quarter have either A levels or a university degree.

The seasonal fluctuation of the employment implicates problems for many people. Every tenth employee in the catering trade was unemployed in the past twelve months. About one fourth feel burdened by an irregular income. This applies to “only” 15 percent on average across all sectors. And almost one third are only moderately or not at all satisfied with social security.

Job often intended only as an interim solution

Little wonder that waiters/waitresses, in particular, often regard their jobs only as an interim solution: 28 percent of them want to change to other jobs, compared to only seven percent on average across all occupational groups. 18 percent would like to change to other employers.

Altogether, the job satisfaction of cooks and waiters/waitresses is slightly below the average. The reasons for this can be explained by taking a look at the partial indexes: only 38 percent of the employees in the catering trade say that they can live well on their incomes.

Only almost half of the employees are satisfied with the opportunities for promotion and development. About one third of the waiters/waitresses are unhappy about the leadership of their superiors, 46 percent are dissatisfied with the options for participation. And company benefits offered in the catering trade leave much to be desired: only 64 percent of all employees in the catering trade are satisfied with the social attitude of their employers, which is about six percent less than the average across all employees. Among waiters/waitresses this share is only 56 percent. 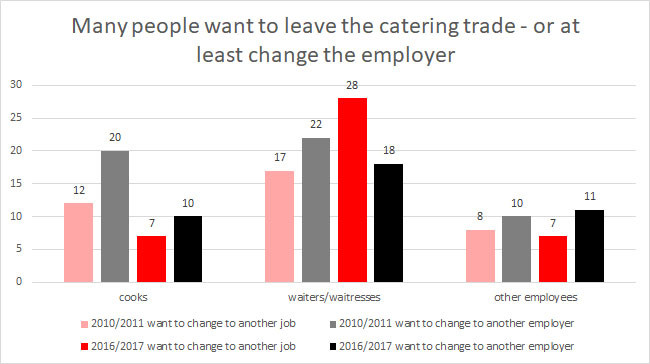 Employees in the catering and hotel trade complain about irregular working hours, a high health burden and a poor work-family balance.

For many employees, working in the catering trade is stressful and frequently results in health problems and illness. 22 percent of the employees feel highly burdened by a permanent pressure of work without any sit-downs - compared to “only” 16 percent on average across all sectors. Almost one quarter of the employees feel burdened by a permanent pressure of time.

Cooks feel particularly burdened: 29 percent are highly stressed by pressure of time, 23 by a constant pressure of work, added by a frequent change of workflows (15 percent), the danger of accident and injury, as well as poor health conditions (eleven percent, each).

Stress factors also include the starting and finishing times and distribution of working hours: for the great majority of employees in the catering trade working at weekends is standard, one quarter also have to work nights frequently. This is to the detriment of the work-life balance: only 68 percent of the catering employees say the latter is good, compared to 81 percent of the other employees. Waiters/waitresses, in particular, rate their work-life balances as being only moderate to poor. Parents often have difficulty reconciling a catering job with childcare obligations: 37 percent of the catering employees with children in their households rate the reconciliation of family and working life as moderate to poor.

All these burdening factors take their toll: the average sick leave of catering employees per year is 11.3 days, which is 1.5 days longer than the average of all employees. Only half of the employees think that they will hang on in their current job until retirement. 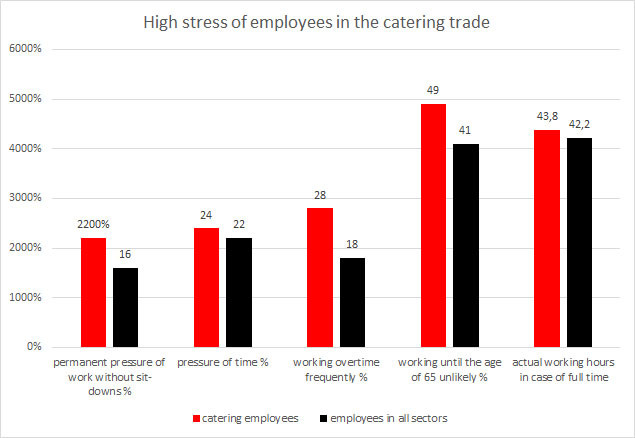 When innkeepers complain about staff shortage and a lack of skilled personnel, they should rather search their own conscience. Because their problems are frequently home-made. Many of those working in the catering trade want one thing more than anything else: to change the job. This is reflected in the Work Climate Index. The often stressful conditions at work, overlong working hours early or late in the day, and low wages on the basis of part-time work or marginal employment are little incentive to remain in the hospitality sector or to start working in the catering trade.

“Mister Work Climate Index” died on the 20th of March 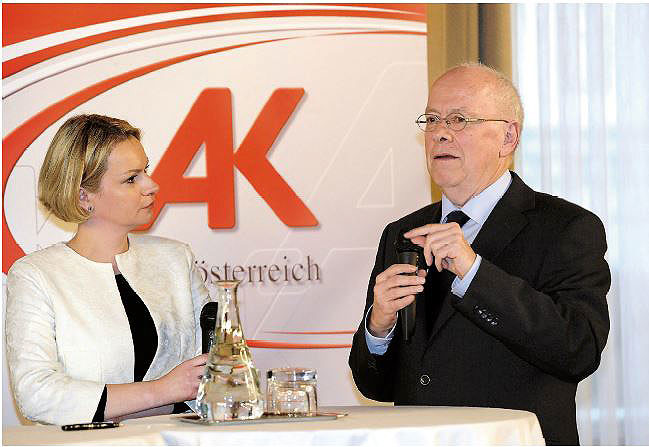 For more than 20 years, the Work Climate Index has been inextricably linked with the name Hans Preinfalk (depicted in an interview with ORF presenter Lou Lorenz-Dittlbacher).

“It has become impossible to imagine socio-scientific research in Austria without the Work Climate Index. It arouses great media attention on a regular basis and has met with international regard and recognition far beyond the Austrian borders. The Work Climate Index, in particular, but also other innovations Hans Preinfalk introduced in the Upper Austrian Chamber of Labour will continue to have an effect for many years to come and be linked with the name Hans Preinfalk”, says AK President Dr. Johann Kalliauer in a Chamber of Labour press release in praise of his long-time companion.

Hans Preinfalk was born in the Upper Austrian Ampflwang in 1949. In 1975, he joined the Upper Austrian Chamber of Labour and became the head of the communication department in the late 1980s. In this function, he was responsible for many innovations which, to this day, have had a positive effect to the benefit of the employees in Upper Austria. His most prominent project was the development of the Austrian Work Climate Index in the mid-90s of the 20th century.

With the Work Climate Index, Preinfalk not only did socio-scientific pioneer work in Austria but, through contributing his ideas, also added to social research in other countries. The implementation of the DGB Index “Good Work” in Germany, the establishment of the “Quality of Work Index” in Luxembourg, the EU project “INSITO - Answers to the Worldwide Financial and Economic Crisis”, as well as networking with institutions from Ireland via South Tyrol to Bulgaria would not have been possible without him.

In the economic and socio-political discussions far too little attention is paid to the employees' view. This may also be due to the fact that, allegedly, insufficient solid data are available. For 21 years, the Austrian Work Climate Index has been supplying these data, and it has thus become a benchmark for economic and social change from the employees' point of view. It examines their assessments with respect to society, companies, work, and expectations. The Work Climate Index captures the subjective dimension, thus expanding the knowledge of economic developments and their implications for society.

More than one third are always available for their companies

A little more than one third of the employees in Austria continue working for the company in their free time. Expressed in figures, this means that 38 percent use their mobiles, computers or laptops to do some work for the company outside normal working hours. This applies especially to men, and specifically to employees in managerial functions: three out of ten executives frequently work in their free time, half of them at least occasionally.

The blurring of boundaries takes effect

People working in their free time find it hard to relax. This sounds logical and has been corroborated statistically: according to the Work Climate Index, 44 percent of the employees working after official hours have difficulty relaxing. By comparison, “only” 21 percent of people not working in leisure time find it hard to calm down after work. About one quarter of employees on average are unable to relax after work.

In Austria, home office workplaces and teleworking have not yet become established: only ten percent of the employees make use of this offer on a regular basis. On the other hand, all-in contracts are becoming more and more common: while in 2013 18 percent of the employees had an employment contract covering “everything”, this applied to 24 percent in 2017. 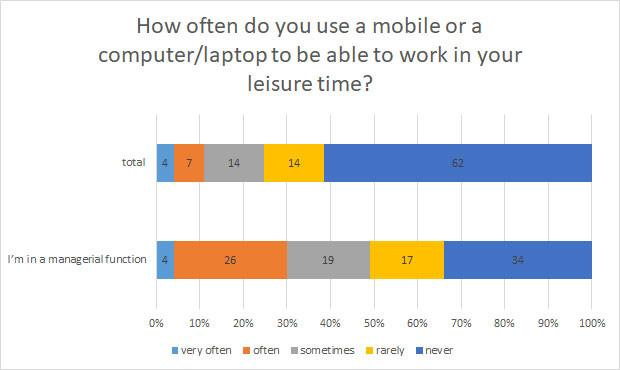 Bild teilenGrafic: How often do you use a mobile in your leisure time? © ., AK Oberösterreich

TO WORK WITH MEDS

More than half of the construction workers and unskilled workers take painkillers on a regular basis to be able to cope with day-to-day work - 13 and eleven percent, respectively, take pain relievers as often as once a week, and approximately one quarter take them at least once a month. Across all sectors, an average of 44 percent of the employees need painkillers, albeit rarely, to be able to go to work every day.

Headaches are the reason for six out of ten employees to take medication at least sometimes to deal with the work routine. There is a significant difference between the sexes: 45 percent of the men never need headache pills, compared to only 30 percent of the women. By implication, 70 percent of the women take a pill against headaches as necessary to be able to do their work.

In terms of flu medication, the situation is a little less dramatic: in the past year, almost one half of all employees took remedies against the flu to perform their work. When comparing the provinces, Upper Austria takes a prominent position: at least two thirds of the employees take flu remedies at least occasionally to feel up to the burdens of the working life.