Low pay for one in five women

Two thirds of the employees earning less than 1300 euros net per month are hardly able to make ends meet. Eleven percent don’t get by at all.

In the past three years the share of employees earning less than 1300 euros net per month in a full-time job was always between 13 and 15 percent. Certain differences exist, however, depending on the age, sex, level of education and employment Situation.

Young people in the low-pay trap

“Only” nine percent of the men earn less than 1300 euros net, compared to almost 20 percent of the women. Nearly one quarter of the employees younger than 25 years receive a low income. In all other age groups, this share is between ten and 15 percent. More than one quarter of the employees with only minimum compulsory schooling work for low pay - compared to only six and three percent among those with A levels or a university diploma, respectively.

Among the employees in the private sector low wages are much more common than among those working in civil service: 18 percent of the blue-collar workers and 14 percent of the white-collar workers earn less than 1300 euros net, compared to only two percent among the public officers. For unemployed people, the low-wage sector often seems to be the only way to find a new job: 22 percent of all people who were unemployed in the past twelve months are now working for a low wage. This is nine percent more than among those who were continuously employed in the past twelve months.

The share of low-income workers is particularly high in the textile sector and in retail trade, hence in traditionally female sectors, as well as in agriculture and forestry, in tourism, and in the services sector. However, very low shares of employees with low income are found in the industry, in traffic, in the building trade and/or in the educational sector, and the lowest share in large enterprises having works councils. Among the agency workers almost 30 percent earn less than 1300 euros net.

Making ends meet with such a low income is hard for three quarters of them: eleven percent are unable and 65 percent are hardly able to get by with the income. Eight in ten of them believe that it will not or only just be possible to live on their pensions later on. Accordingly, the job satisfaction of low-income workers is only at a value of 101 points - which is five points below the average. 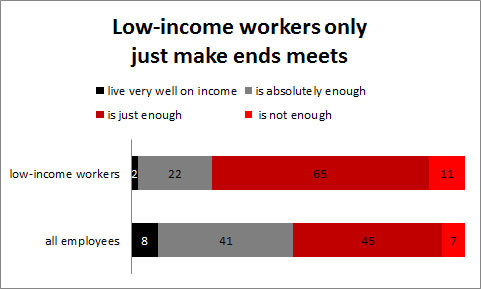 Employees are the true performers in our society. Whether in the office or on the construction site, in childcare or geriatric care, in the fire brigade or emergency medical services: what they accomplish has to be honoured. Because their work is worth more. Approximately 422,000 employees in Austria earn less than 1700 euros gross per month. This is by far too little to pay for rent, electricity, heating, basic necessities or child support. In many cases it’s just enough to survive, which is corroborated by the current data of the Work Climate Index: Three quarters of low-wage earners say that they cannot or just barely make ends meet. Eight in ten assume that their pensions will not or just barely be enough to live on. Therefore, it is high time to raise the collectively agreed minimum pay to 1700 euros gross per month.

Drivers are male, 44 years old on average, have completed an apprenticeship, work full time, and their job satisfaction is far below the average.

The job satisfaction of drivers is ten index points below the average of all occupational groups. While the Work Climate Index over all lines of work is at 107 points, drivers don’t reach more than 97 points. Only construction workers, textile workers and cleaners are even less satisfied with their work.

Seven in ten have completed an apprenticeship

The job of a driver is still (almost) purely a man’s job: nine out of ten employees in the sector are male. The mean age is 44 years. Seven out of ten have completed an apprenticeship. The other 30 percent are distributed almost equally among those having attended some secondary schooling up to A levels and those with compulsory schooling. In all other jobs, only 40 percent of the employees have completed an apprenticeship.

The majority of drivers is employed on a full-time basis. Approximately one third work shifts. A driver’s job is characterized by extremely long and irregular working hours. While the mean work week is 38.5 hours in other occupational groups, drivers work 46 hours on average.

Drivers have a lot of responsibility and high pressure of time

The mental and physical stress of drivers is clearly higher than in other trades. No wonder that many of them think they will not hang on until retirement.

Drivers are not very well: less than one fifth of them say that they are - all in all - very well. In other occupational groups, at least one third of the employees say so. Six out of ten don’t think they will hang on until retirement. The reasons for this are very clear: the work is physically and mentally exhausting and too strenuous.

The most stressing factors are the extremely high responsibility for the truck and the cargo as well as road traffic in general. Every other driver complains about high responsibility in the job, compared to “only” 22 percent on average in all other lines of work. More than 40 percent of the drivers say that high stress is also caused by the need to be permanently concentrated and by enormous pressure of time. Added to this, there are solitude, social isolation, the danger of accident and injury, weather or noise. Drivers see little opportunities for promotion and development and complain about a lack of training opportunities.

Pain in the back caused by sitting for hours

Drivers spend most of their (long) working hours sitting. In between, i.e. during loading and unloading as well as on securing the cargo, they are frequently exposed to extreme weather and have to lift heavy loads. These changing work routines are more and more felt as stress. Almost 70 percent of the respondents say that they suffer from muscle tension in the neck and shoulder region. 60 percent complain about back ache. 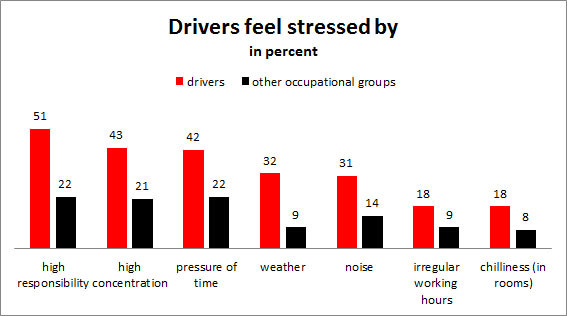 Employees in the south are satisfied

Job satisfaction in the provinces varies - sometimes substantially.  It is highest in Styria and lowest in Salzburg and Vienna.

When we take a look at the job satisfaction in the individual provinces, we also have to consider the structural differences. While in Vienna six in ten employees work in medium-sized or large companies, almost 60 percent of those living in Burgenland and Lower Austria are employed in very small businesses with less than five employees. In the federal capital, the services sector is significantly bigger than in other provinces - whereas production or tourism are less important. In terms of the educational level, too, Vienna is different: more than half of its population has A levels or a university degree, compared to between ten and 30 percent in the other provinces.

Job satisfaction is highest in the southern provinces Carinthia (113 index points) and Styria (111), it is lowest in Salzburg (101) and Vienna (102): The Styrians’ assessment of their own position in society and their economic future is optimistic, Carinthians regard conditions at work and their personal future positively. 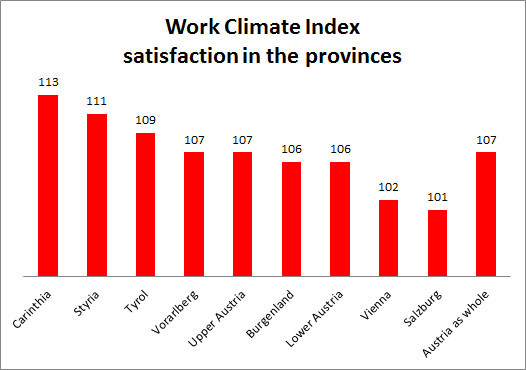 SATISFACTION HAS MANY REASONS

How satisfied employees are in their jobs depends on a number of factors. The comparison of provinces in detail provides an explanation for the - sometimes blatant - differences. While employees in Styria and Carinthia are most satisfied with the specific kinds and contents of their activities, Salzburg comes off worse than all other provinces.

In terms of working hours and income, the employees in the two most southerly provinces are also most satisfied. Here, too, it is striking that employees in Salzburg are least satisfied, followed by those in the federal capital. In Vienna, more than ten percent say that they are unable to get by on their incomes. In all other provinces, this share is between two and seven percent.

There are also remarkable differences where stress perception is concerned: in Carinthia and Styria only 17 and 21 percent of the employees, respectively, suffer from mental stress, compared to 36 percent in Vienna. In the federal capital, the share of persons suffering from physical stress is also higher than anywhere else.