The top 3 and flop 3 of satisfaction: The Work Climate Index has recovered

The Work Climate Index has recovered

After reaching an all-time low last spring, the Work Climate Index has recovered, being 107 points at present. What has grown, in particular, is the satisfaction of employees with their companies.

After the historic low in spring, the Work Climate Index has clearly picked up and is now 107 points. In the first instance, employees are more satisfied with the situations in their companies. Both income and promotion/career opportunities, as well as the social attitude of the companies towards their employees have been rated better than in the spring of 2016.

Two new players on the rostrum

As regards the individual occupational categories, some major differences and shifts have occurred. Out of the three most satisfied professional groups of the years 2010 to 2013 only the back office employees are still among the Top 3. With 114 index points they rank third behind the employees in cosmetics/health care and kindergarten teachers with 115 points, each. Managers and bank clerks, however, who came first and second in the previous survey period, have lost six and seven index points, respectively.

The biggest loss was registered among the social scientists (minus ten), management consultants (minus nine), warehouse workers (minus eight), while those who gained most in terms of satisfaction were employees in cosmetics/health care with a plus of five index points.

What characterises a good job

Differences are most pronounced when it comes to physical burdens: in the category “Physical stress” construction workers reached a value of 30 points, cleaners 29 points and textile workers 25 points, compared to only six to eight points in the professions featuring highest satisfaction levels.

Seven out of ten employees are satisfied with their representation

Not even half of the employees in Austria have works councils in their companies, with a downward trend: ten years ago the share was almost two thirds.

While 90 percent of those working in public administration and 61 percent of those employed in commerce and industry have works councils, only 14 percent of the employees in tourism benefit from such representation. In transportation and in trade this figure is just under 30 percent.

Approx. 70 percent of those having works councils think that they are sufficiently informed about the latter’s work and offers. The major part of information is still provided through personal contact - more than half of the employees are regularly visited by employee representatives at their workplace. 37 percent are informed via e-mail and a little more than one quarter find information on notice boards. So far, Intranet, blogs and social media have played only a minor role.

Seven out of ten are satisfied

The degree of information provided correlates with the degree of satisfaction: seven out of ten employees are satisfied with the performance of their works councils, only 20 percent wish the latter showed more fighting spirit when it comes to working hours or remuneration. And 70-odd percent are satisfied with the services offered by the works councils such as excursions and discounts.

Employee representatives do invaluable work which often remains unseen, but which improves the working atmosphere, the conditions at work and the situations of all employees. This comes at a cost: employee representatives complain about a lack of time resources, stress and insufficient participation rights in companies. They also suffer from the fact that they have to be available all the time. This has been revealed by a survey among members of works councils carried out by the Institute for Social and Economic Research. Still, a lot more than two thirds of the employee representatives are highly motivated when it comes to doing their work.

The function of a works council member should not be like tilting at windmills but should gain more recognition. Employee representatives are not agitators in companies but an important element of internal social partnership reconciling interests and ensuring economic success.

The majority of companies support the works councils. This is a good thing, because internal social partnership benefits the working atmosphere.

The road back from unemployment to working life is often a bumpy one.

The employee representatives themselves notice growing physical and mental stress among the employees. More than one third say that physical burdens have increased in the past twelve months, and almost three quarters see mental stress on the rise. Therefore, the key issues that works councils deal with are health promotion, an increasing pressure to perform, as well as the pressure exerted by employers to reduce leave days and comp time. Other topics often mentioned by employee representatives are working hours, remuneration and job security.

Parallels between the studies

The expected parallels to the Work Climate Index become evident as employees confirm that the works councils deal with the right topics: the aspects most frequently mentioned were work strain, pressure and stress (37 percent), working hours and leave (33 percent), wage and salary (32 percent), layoff (28 percent) and health (27 percent).

In the economic and socio-political discussions far too little attention is paid to the employees' view. This may also be due to the fact that, allegedly, there are insufficient solid data. For 19 years, the Austrian Work Climate Index has been supplying these data, and it has thus become a benchmark for economic and social change from the employees' point of view. It examines their assessment with respect to society, company, work and expectations. The Work Climate Index captures the subjective dimension, thus expanding the knowledge of economic developments and their implications for society.

The calculation of the Work Climate Index is based on quarterly surveys taken among Austrian employees. The random sample of approx. 4,000 respondents each year is representative so as to enable telling conclusions regarding the mental state of all employees. Since the spring of 1997, the Work Climate Index has been calculated and published twice a year. There are also supplementary special evaluations.

For current results and background information please refer to ooe.arbeiterkammer.at/work_climate_index. There you will not only find the comprehensive work climate database for evaluation, but it is also possible to calculate your personal satisfaction index with your workplace online within just a few minutes. You will also find the Executive Monitor Report online, which deals with the question of how satisfied Austrian executives are with their work.

For the first time, the job satisfaction of employees younger than 26 is similar to that of people older than 45 years of age. The big difference, however, is how they assess their chances on the labour market.

Since last spring, job satisfaction has increased in almost all age groups, with one exception: the satisfaction of those younger than 26 years of age has decreased by five index points over the past two years, most strongly in the category of “Economic optimism”. At the same time, the stress to innovate has increased for younger employees.

The worrisome trend of falling job satisfaction among young employees contradicts the previous rule of thumb “the younger the more satisfied”. Nowadays, there is only one substantial difference between the age groups of under 26 and over 45 years old, namely the assessment of their own chances on the labour market: 45 percent of the young believe that they will easily find new jobs if they lose their old ones, compared to only 26 percent of the older employees. Two years ago, as many as 73 percent of those under 26 years old expected good chances on the labour market. Older employees, however, rate time management and income slightly more positive.  49 percent of the older people consider it rather unlikely or very unlikely that they will hang on till retirement. And after all 44 percent of those aged under 26 think so, too. 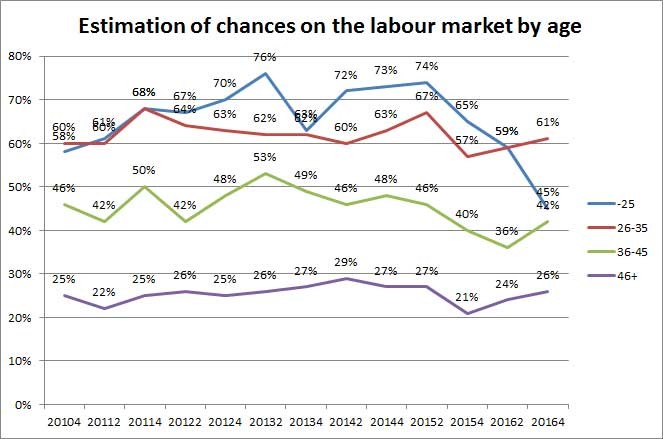 Job satisfaction is not (only) a question of physical and mental stress. Because older employees also suffer more from health issues: while more than one third of the younger people under 29 years of age are free from physical troubles, this applies to less than one quarter of the employees older than 45 years. Almost 40 percent of the latter are afflicted with six or more physical problems. What is alarming, however, is that as many as one quarter of the young people report on suffering from six or more physical conditions.

Eight out of ten employees younger than 45 years feel often or very often fit enough to do what they want. In the group of those over 45 years of age only 63 percent are at least often in such good shape that they can live their lives the way they want to. All the same, older people are less worn out by their work and feel less or hardly more exhausted at the end of a day than younger employees. On the one hand, this is due to shorter working hours, since older employees work less overtime or have already reduced their working time. On the other hand, it is also a matter of the line of work: older employees are more often civil servants, and only few of them are blue-collar workers.