Trapped in the "wrong job"

Only about seven in ten employees in Austria work in jobs that are consistent with their educations and their highest completed qualification levels.

Fierce competition in the labour market

The losers are those with low levels of education - they have to accept menial jobs or face unemployment.

People re-entering the job market after being unemployed in the past twelve months must frequently fall back on jobs for which they are formally overqualified. One third of the previously unemployed now work in jobs below their levels of education.

Overqualified people have a significantly lower satisfaction with work and life compared to those working in positions consistent with their education. Trained workers employed as unskilled labourers, for example, are clearly more dissatisfied with their incomes, opportunities of participation, and social positions, as well as with training opportunities, and with their overall professional life. In case of university graduates, the differences are less pronounced - but their satisfaction, too, depends on an employment that is appropriate to the education.

What overqualified employees are most dissatisfied with are development opportunities and promotion prospects. Only one quarter of the people who have completed an apprenticeship and who currently work in menial jobs are satisfied in this respect, compared to more than 60 percent of all employees in Austria.  Therefore, unsurprisingly, 28 percent of the overqualified employees want to switch companies or professions - as opposed to only 16 percent across all employees. 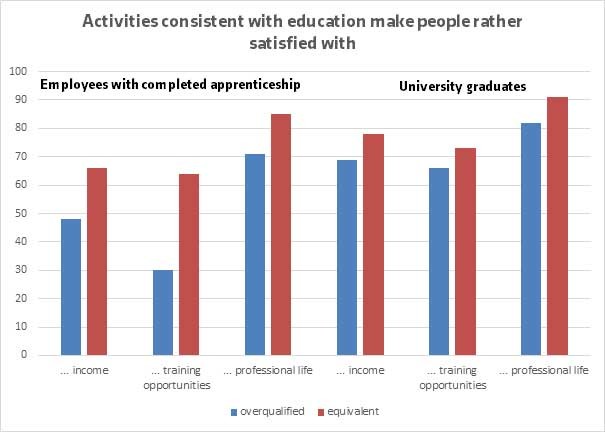 30 percent of the employees in Austria say that their jobs have changed over the past five years because of technical progress and digitalization.

The digitalization of the working world has a tangible impact on the employees and their working and living environments. Almost one third say that technological progress has changed their workplaces in the past years. One third think that the number of jobs has decreased. Four in ten fear that even more jobs will get lost in the future.

The negative effects perceived by 40 percent, each, are the possibilities of increased surveillance and monitoring at the workplace as well as excessive technical demands on older employees. More than half take it for granted that in future it will be required to keep learning new things all the time to be able to stand one’s ground in the job. When asked about the impacts of digitalization on their own work, opinions are divided. 43 percent believe that their workplace will change. 27 percent expect higher strain, compared to 47 percent who anticipate a reduction of their workload.

The Innovation Fund of the Upper Austrian Chamber of Labour 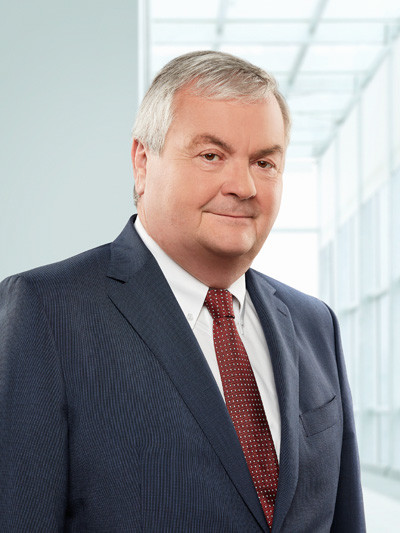 More and more people feel that they can no longer keep up with the radical changes in today’s digital changes in the working world. Many of them have experienced changes in their workplace because of digitalization. Not all of them are able to cope with the pace of technological progress. They need more and specific support in grappling with digital change.

There are many initiatives promoting progress in companies, with only very few focussing on the working people. Digitalization must also be to the advantage of employees, and not only to that of an elite benefiting from it.

Therefore, the Chamber of Labour has started the AK INNOVATION FUND endowed with 150 million euros nationwide. In Upper Austria alone, we will spend 30 million euros in the five years to come to support projects that deliver tangible benefits to employees and improve the working conditions of people in the digital world. For more information, refer to www.arbeitmenschendigital.at

Constantly available via smartphone and laptop

Technological progress can make work easier, but sometimes also harder - while the boundaries between job and private life become more and more blurred.

According to the Work Climate Index, 21 percent of the employees have a work cell phone - three quarters of them can receive and send e-mails with their device. Almost just as many, namely 18 percent, have a company laptop. While this gives them more autonomy in terms of time and space, they have to accept that the company can contact them (at) any time, which makes it more difficult to set boundaries between work and private life.

Adaptations and digital upgrades of companies go hand in hand with an expansion of working hours at the expense of leisure time, holidays, or sick leave. Almost one quarter of the employees work, at least sometimes, in their leisure time, 16 percent during holidays, and twelve percent have taken care of work matters from home during sick leave. Among those using their business mobile daily even 37 percent work quite frequently when they are sick at home. One third state that they have to work very often during their leisure time.

Being available all the time has its drawbacks. Almost six in ten employees working also in their leisure time, in their holidays, during a sick leave or nursing leave, suffer from being pressed for time. This demonstrates that what appears like autonomy over time will quickly reach its limits. 45 percent feel pressure because of constant work strain without a chance of catching a breath. Four out of ten feel stressed by technical and organizational changes. Moreover, 37 percent of those concerned find the shift of working hours into leisure time mentally stressful and exhausting. 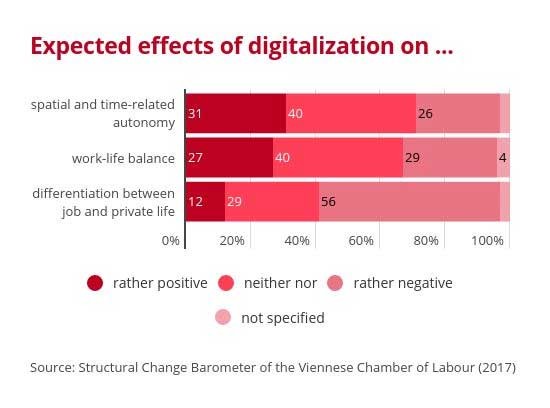 Source: Structural Change Barometer of the Viennese Chamber of Labour (2017)

In the economic and socio-political discussions far too little attention is being paid to the employees' view on current developments. This may also be due to the fact that, allegedly, insufficient solid data are available. For 22 years, the Austrian Work Climate Index has been supplying these data, and it has thus become a benchmark for economic and social change from the employees' point of view. It examines their assessments with respect to society, company, work, and expectations. The Work Climate Index captures the subjective dimension, thus expanding the knowledge of economic developments and their implications for society.

The calculation of the Work Climate Index is based on quarterly surveys conducted among Austrian employees. The random sample of approx. 4000 respondents each year is a representative number to enable telling conclusions regarding the state of mind of all employees. Since the spring of 1997, the Work Climate Index has been calculated and published twice a year. There are also supplementary special evaluations.

For current results and background information please refer to ooe.arbeiterkammer.at/work_climate. There you will not only find the comprehensive work climate database for evaluation, but you can also calculate your personal satisfaction index with your workplace online within just a few minutes. You will also find the Executive Monitor Report online, which deals with the question of how satisfied Austrian executives are with their work.

A TRUCK FOR A WORKPLACE

Professional drivers are burdened by pressure of time, isolation, an increased danger of accident and injury, as well as overlong working hours.

About 100,000 people in Austria work as professional drivers in transportation. 95 percent of them are male, more than half are over 45 years old. Seven out of ten professional drivers have completed an apprenticeship. Compared to other employees, they suffer more than average from pressure of time (33 percent), the danger of accident and injury (25 percent), a constant pressure of work (24 percent), and isolation (eleven percent).

All this results in a work satisfaction that is clearly below average: in the period from 2016 to 2018, the Work Climate Index of professional drivers was 97 points. By comparison - the index on average across all sectors was 109 points. 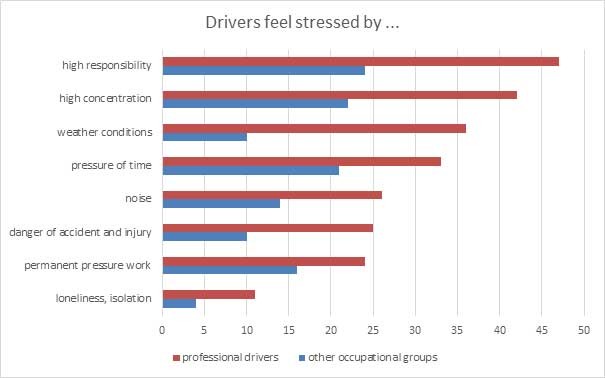 Source: Structural Change Barometer of the Viennese Chamber of Labour (2017)

HIGH DYNAMICS IN THE LABOUR MARKET

Official labour market statistics based on a certain reference date reflect the high dynamics prevailing in the labour market only to a certain extent. As reported by the Public Employment Service AMS, more than 600,000 jobs per year are started from unemployment. Then there are up to 300,000 people switching directly from one job to another. According to the Work Climate Index, between 16 and 18 percent of the employees want to change the company or even the profession - which amounts to 650,000 employees.

Waiters/waitresses and employees in the catering trade (37 percent) are those most willing to switch jobs, followed by stock clerks and employees in tourism. The reasons for this are the economic situation of the company, the leadership of superiors, the activity per se, as well as dissatisfaction with income, a poor working atmosphere, and a feeling of being burdened by a high pressure of time.

The lowest ambitions to change the profession or company is found among policemen/women, bank clerks, and employees in medical care professions. Likewise, accountants, public employees, and university professors want to keep their present jobs