Significant change in the industry

Typical factory work is dominated by men aged over 40 with minimum compulsory schooling or a completed apprenticeship as well as a high share of migrants.

An important occupational field is undergoing significant changes. 20 years ago 39 percent of all wage earners were blue-collar workers. Meanwhile the rate has gone down to 29 percent. 12 percent of them call themselves factory workers.

Male, older, and with completed apprenticeship

At 27 percent, the share of employees with a migration background is higher than in other occupational fields (13 percent).

Factory workers are mainly employed in the western and central provinces: more than half of them work between Vorarlberg and Upper Austria, whereas only few are found in Vienna.

Most of the factory workers are employed in bigger companies. Two thirds work for enterprises with 100 employees or more. The majority are employed in the industrial and trade sectors, eg. in the metal, textile or wood industries.

Taking the average of the years 2010 to 2015, factory workers reached a Work Climate Index of only 100 points. This is eight points below the value in other professions. In the partial index "Society" it is mainly the own social status that is assessed considerably lower by factory workers: only 58 percent were satisfied with their rights as employees in the years from 2010 to 2015 (rest: 70 percent), only 60 percent with their social standing (rest: 72 percent).

In the partial index "Expectations" both the career prospects and the subjective chances on the labour market were rated considerably lower by factory workers: only 42 percent were satisfied with their opportunities for promotion and development, only 45 percent with training opportunities.

This is hardly surprising since only 14 percent say that they got advanced vocational training. Therefore, the clear majority of factory workers think they have poor chances on the labour market: not even one out of three believes he/she could get an acceptable new job "easily".

Factory workers and other professions 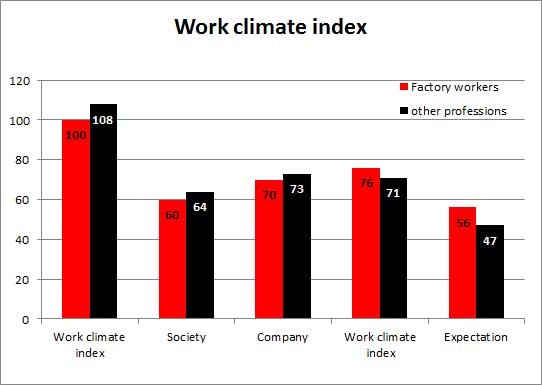 Little has changed in the past 15 years

About one half of all Austrian employees still work in their own residential community.

43 percent of all employees work in jobs outside their municipality of residence but still inside their own province. Four percent leave their province to work, and only one percent commute abroad. This means only a slight shift compared to the year 2000: at present, four percent more commute within their own province, and five percent fewer to other provinces. Almost all commuters are daily commuters, only five percent are weekly commuters.

Since 2010, the share of out-commuters has significantly increased in Styria and Upper Austria: meanwhile, two thirds of the people employed there commute from one municipality to another.

42 percent of the commuters travel up to 15 kilometres per day to and from work (both ways). For 35 percent, the workplace is between 16 and 30 kilometres away, and for one fifth more than 30 kilometres.

Taking the travel times of commuters into account, the weekly hours of work in Austria rise from 38 to 41 hours on average, and from 42 to 45.5 hours when considering only those working full time. Viennese employees spend a lot of time going to work and back home, almost five hours per week on average. 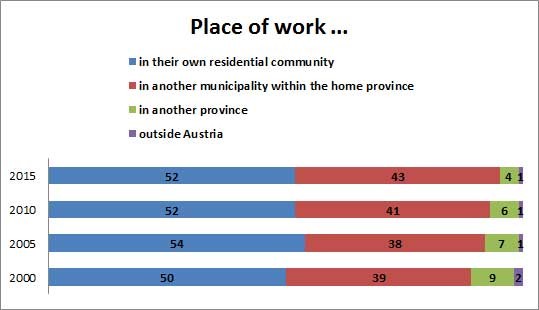 Only 28 percent of the factory workers think that their current qualifications will be enough for them to carry out their jobs very well five years from now. One out of four expects to be able to do so only mediocrely or poorly. Factory workers also assess their career opportunities and chances on the labour market as lower, not only because of their higher average age.

Moreover, factory workers are also clearly less satisfied than other occupational groups both with the kind and content of their professional work and with the opportunities to decide on workflows themselves. One out of five is explicitly dissatisfied with the degree of creative scope in his/her work.

Factory workers are slightly more often affected by unemployment (eight percent), employed as temporary worker (eight percent) or uncertain as regards their jobs (21 percent). As a consequence, only 34 percent of the factory workers think they can do their current work till retirement.

Having two (or even more) jobs is no mass phenomenon in Austria. All in all, approximately four percent have at least one side job.

Four percent of the employees have two or more jobs.
Approx. 150,000 employees have another occupation in addition to their main job, compared to only 39,000 people in 1991, which means a considerable increase.

Having a side job does not necessarily mean that it is needed to survive for financial reasons. Remarkably, people having second jobs are older (41 percent are aged over 45 years) and better educated: more than one out of three has a university degree.

Multiple employment is more popular with academics. This applies, for example, to graduates working in the education sector after finishing their studies: until becoming permanently employed one third work in temporary employments eking out a living with side jobs, in most cases through freelance service contracts or independent work.

What are the principal occupations from where employees start taking up side jobs? Quite frequently, independent contractors are not only employed by one but sometimes by several employers. 13 percent of all independent contractors have multiple employments. Among the white-collar workers and civil servants the figure is four to five percent, and two percent among blue-collar workers.

Evaluations have also revealed that multiple employment is more frequent among atypical employees (mainly temporary or part-time workers) as well as among employees in education, in the health-care and social sector, as well as in business services.

In the economic and socio-political discussions far too little attention is paid to the employees' view. This may also be due to the fact that, allegedly, there are insufficient solid data. For 18 years, the Austrian Work Climate Index has been supplying these data, and it has thus become a benchmark for economic and social change from the employees' point of view. It examines their assessment with respect to society, company, work and expectations. The Work Climate Index captures the subjective dimension, thus expanding the knowledge of economic developments and their implications for society.

For current results and background information please refer to ooe.arbeiterkammer.at/work_climate_index.
There you will not only find the comprehensive work climate database for evaluation, but it is also possible to calculate your personal satisfaction index with your workplace online within just a few minutes. You will also find the Executive Monitor Report online, which deals with the question of how satisfied Austrian executives are with their work.

The topic is taken seriously - but often there's little knowledge

Almost three quarters (74 percent) of the Austrian employees say that it's important to them how companies deal with their data.
Another 19 percent find this aspect rather important.

The problem is that young people have little awareness in this respect. They often fail to delete data which might affect their professional career for a long time into the future.

Better information about rights and obligations in matters of data privacy leads to a more critical attitude of employees towards their enterprises. However, only half of the employees in Austria is informed about aspects of data protection. Commercial employees and teachers, in particular, are hardly or not on familiar ground when it comes to privacy.

In general, the handling of personal data is taken seriously. Only one person in ten (nine percent) has identified some problematic behaviour in this field, which might seem a little naive. Employees think that big enterprises are well aware of their responsibility and therefore assume it conscientiously. 95 percent of the employees believe that their companies have never had any problems with data protection. 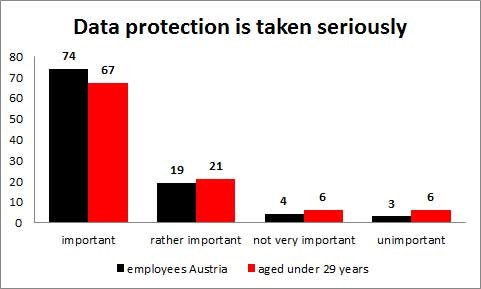 MONITORED AT EVERY TURN?

21 percent of the employees suspect that their activities at the workplace are monitored via computer systems. In big companies, in particular, they think this kind of recording is used.

Internet postings may have consequences

There is little fear, however, that companies may search for private photos and videos. Two thirds (66 percent) are sure that their employers would not resort to such ways.

An exception are the employees up to 29 years of age: 15 percent of them have got the impression that employees are screened. And as much as seven percent of the respondents say that postings on the Internet had negative consequences.