Retiring later, working longer and more - this is repeatedly postulated by the economy. The Work Climate Index reflects the reality of older employees.

Older employees grow more and more despondent in view of the tense situation on the labour market. Over the last 10 years the career expectations of those older than 45 years have decreased by four index points, optimism for society by five points, and general life satisfaction by six points. At present, older employees are regarding jobs in Austria as rather insecure. Approximately every sixth employee over 45 years of age is also unsure as regards his own job.

According to the Public Employment Service approximately 80,000 of those older than 50 were unemployed in Austria at the end of October. Thus, compared to the previous year, unemployment showed the sharpest rise in the group of older employees (plus 14.5 percent). The Work Climate Index illustrates: older people are unemployed for longer periods than younger ones. On average, it takes an older unemployed person (45 years and older) two months longer to find a new job than a younger one (26 years and younger).

Older people regard their job prospects as critical

Older employees are clearly more pessimistic as regards their job prospects on the labour market: only a total of 27 percent of those older than 45 years think it would be easy for them to find a new job if they lost their present position, among them only five percent who think it would be "very easy". Job chances are estimated as being lowest by older blue-collar workers (19 percent) and low-skilled employees aged 45 and older (12 percent). Compared to that 72 percent of those younger than 26 believe in their job prospects. After all, 16 percent of the younger say it would be "very easy" to find a new job.

Fear of poverty in old age? 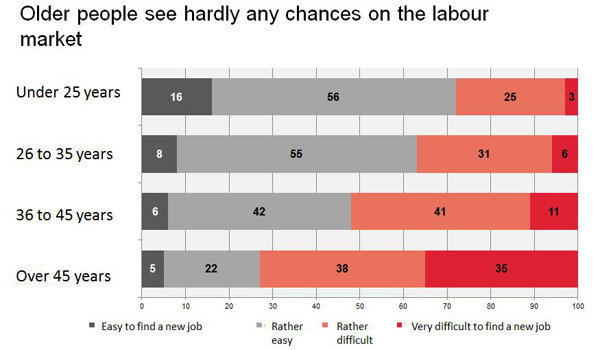 For many years the retirement age of employees has been a continuing point of contention in Austrian politics. There's the almost unanimous postulation that people should work longer. Actually, in no other EU country the employment rate of older employees is lower than in Austria. But hardly anyone has ever said where the required jobs should come from.

Moreover, in most cases better working conditions for older employees, in particular, are still a long way off. And yet 53 percent of the people aged 45 and older answer the question "Will you be able to work in your job until the retirement age of 60/65 under the present conditions?" in the negative. What is equally alarming: half of those aged 36 to 45 already answer this question in the negative.

Into the bargain, the national pension system has been badmouthed for many years and so lots of people think they will not be able to live on their old-age pension.

Once again, the Chamber of Labour is postulating a change of thinking and countersteering in terms of working conditions instead of all the fine words said in this respect. The proposals have long since been on the table: reduction of overtime and a reward/penalty scheme regarding the employment of people aged 50 and more.

By answering a couple of questions in a few minutes you can calculate your personal job satisfaction. The Chamber of Labour has modernized the Work Climate Index self-test.

The redesigned online database meets all current standards. Additional objectives were a modern and clearly arranged design and more options for evaluation.

The comprehensive and versatile figures of the Work Climate Index offer useful information for employee representatives, journalists, scientists and students.

The data can be accessed easily and quickly. The use of the database is free of charge, and there is no registration or installation required.

Thus the Upper Austrian Chamber of Labour offers access to approx. 70,000 data sets that are updated twice a year. Through personal variables such as age, sex, education etc. certain groups can be examined carefully. The different elements of the Work Climate Index help examine specific fields of working life. By defining certain periods under review a good survey is ensured. The results can be downloaded as tables or charts and used directly where needed. So all those interested in job satisfaction have a modern, easily usable and complete online database available that permits analyses and comparisons covering many years.

In the economic and socio-political discussions far too little attention is paid to the employees' view. This may also be due to the fact that, allegedly, there are insufficient solid data. For more than 15 years the Austrian Work Climate Index has been supplying these data, and it has thus become a benchmark for economic and social change from the employees' point of view. It examines their assessment with respect to society, company, work and expectations. The Work Climate Index captures the subjective dimension, thus expanding the knowledge of economic developments and their implications for society. The calculation of the Work Climate Index is based on quarterly surveys taken among Austrian employees. The random sample of approx. 4000 respondents each year is selected with a view to being representative so as to enable telling conclusions regarding the mental state of all employees. Since the spring of 1997, the Work Climate Index has been calculated twice a year. There are also supplementary special evaluations.

For current results and background information please refer to ooe.arbeiterkammer.at/arbeitsklima . There you will not only find the comprehensive Work Climate Index database for evaluation, but it’s also possible to calculate your personal satisfaction index with your workplace online within just a few minutes. You will also find the Executive Monitor Report online, which deals with the question how satisfied Austrian executives are with their work.

Not only work is felt to be more stressful and wearing in some partial areas, but the future prospects of employees are also getting more dismal. Since last spring, the subdimension "career" has fallen by three points, the sub-dimension "chances on the labour market" by two. Over the past five years the two index values have decreased even more.

This becomes visible if we take a look at the satisfaction of the Austrian employees with their opportunities for promotion and development: five years ago - that is to say right in the middle of the crisis - 57 percent of the employees were still satisfied with their career opportunities, Meanwhile this applies to less than half of them (48 percent). Blue-collar workers (39 percent), migrants (35 percent) and low-skilled employees (37 percent) are particularly dissatisfied. And what is more: approximately every fifth in these three groups estimates his own job as being insecure.

Aggregate value decreased by one point

The latest peak of the Work Climate Index was in autumn 2007 when it was 112 points. Subsequently, there was a sharp decline caused by the financial and economic crisis. Mainly the partial indices "society" and "expectations" have seen a crisis-related decrease in the past few years. There's no real recovery of the Work Climate Index in sight: 107 points is not such an overwhelming value.

More and more people find their work increasingly demanding and strenuous. As a consequence, pressure caused by stress is growing. Compared to last year, the sub-dimension "mental stress" has increased by 2 points, and the same applies to "physical stress". Currently, about 46 percent of the employees state that they feel much or rather stressed by pressure of time, compared to 43 percent one year ago. Stress caused by bad health conditions at the workplace has also increased by three percentage points to 27 percent. Men, in particular, feel higher pressure caused by stress: the mental stress of male employees is four points higher, and physical stress 15 points higher than that of female employees. 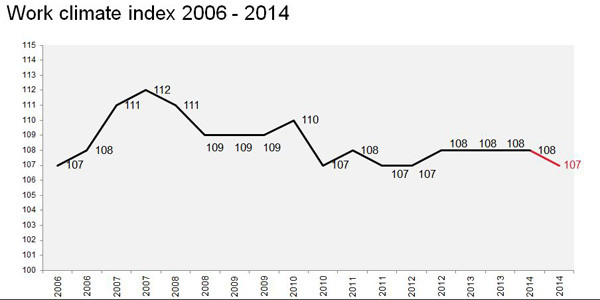 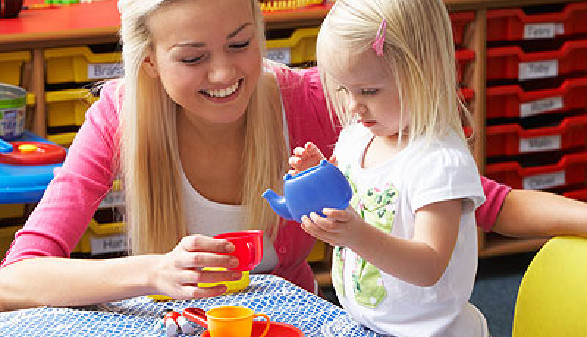